It is Friday night, and you know what that means..
It is time to Dare to Share!
Whew, this Friday was a lot less eventful than it was last week.  It was another rainy day, but I did not have to travel, and my tire is still on my car. :) If you missed what happened last week, you can read about it here.
This past week, I had the chance to post several posts.   I shared several of the Prime Day Deals that I found.  While it is not longer Prime Day, you might still be interested in some of the cool party items and other  fun finds I shared.  You can see those posts below.
Prime Day Deals Have Already Started
Amazing Amazon Deals on Must Have Party Items
Even More Must Have Amazon Deals 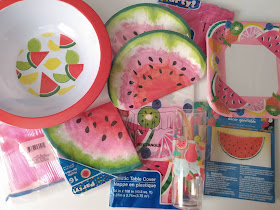 I also added to my Summer Party Ideas Series.  This week I added the supplies we found for a Watermelon Party.  We are actually having a watermelon party at the beginning of July. My daughter and my boyfriend's daughter are only 2 days apart.  I My daughter has had many themed parties over the years, and is planning for something a little later in the month.  My boyfriend's daughter has not had a birthday party in awhile so I took her to Dollar Tree to pick out supplies.  She loves watermelon (and many other kinds of fruit) so she really wanted to go that theme.  We found so many great supplies, and I have several party crafts and ideas  that I will be sharing with you over the next few weeks.
Well it looks to be about that time.. It's time to get the party started.. Link up and HAVE FUN!