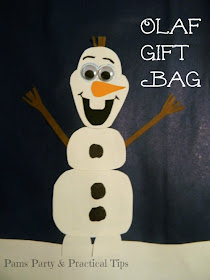 Today I planned on bringing you a different project, but unfortunately my first attempt at it did not work out.  I went to try again this morning, only to find that I  was out of the key ingredient.   I would have gone to the store, but one of my girls came home early not feeling  well, and the other never made it to school.  I then thought I would go to Plan B, and make another one of my planned projects.  I did not have the chance to make that project because we had a bit of mouse trouble which will soon be posted on Surviving the Crazy Life.   So once things settled down, and I had a chance to breathe, I went to Plan C, which is to share my Olaf Gift Bag.  It is not difficult to make, and would be a lot of fun to use for the goody bags at a Frozen Party. 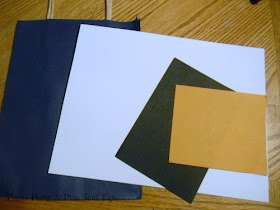 I started with a dark blue bag that I bought at the dollar store. (it came in a pack of 2)  I also pulled out some white, black and orange cardstock.  Not pictures a small piece of brown cardstock, and google eyes. 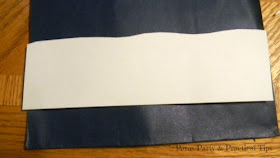 This part is totally optional. Add a piece of white cardstock the same width of the bag at the bottom for a snowy background.  I had not glued this piece down yet, so it is not quite in place. 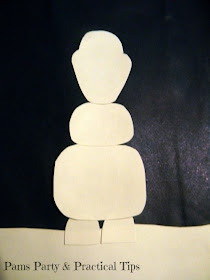 I cut the pieces of Olaf's body out of the white cardstock. I then put him together before gluing him down, so I could make sure I liked how he looked. 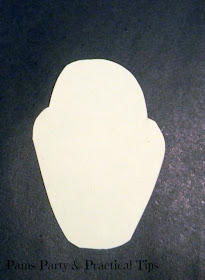 Olaf's head has an unusual shape.  The top of his head is thinner than the bottom two thirds. Because he has such a big smile, this snowman has cheekbones! Mine are not symmetrical, but that is okay.   The bottom of this his head is actually his neck. I round it off slightly, so it would fit nicely against his middle.  The middle and the bottom pieces are half squares, half circles. His feet flat on the bottom and rounded on the top, and look a little bit like mini marshmallows. 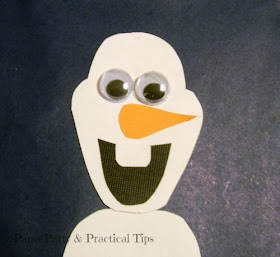 I could have used paper circles  for his eyes, but I felt google eyes would work well, and they would be much quicker glue on.  I cut the carrot nose out of the orange, the inside of his mouth in black, and of course his giant tooth in more of the white. 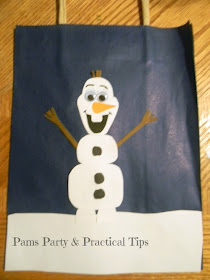 Now all that is left is the details.  I outlined the google eyes with a blue colored pencil.  I drew on his buttons, eyebrows and corners of his smile with black marker.  I used a scrap piece of brown cardstock to make his branch arms and tuft of hair.

I will be linking my Olaf gift bags at the following linky parties here.   Be sure to follow me by email, so you don't miss a party post!