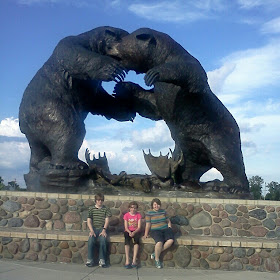 Last week we decided to make a stop at a Cabelas store on the way to the train station to pick up grandma.  We had passed this store many times, but had never stopped and gone in.  We decided to make our visit part of our Summer Fun Challenge.  Right away you can tell this store is going to be BIG.  In front of the store they have this massive sculpture of two bears fighting over food.  I am not sure if they are in front of all of their stores (there are many around the country) or if it is just at this one. 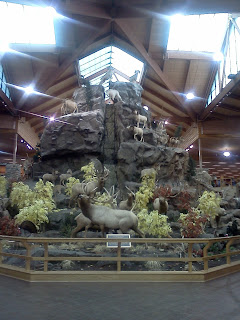 We do not come from a family of hunters.  In fact, we are not really fans of hunting at all, but the animals displayed around the store were quite beautiful to look at.   When you first walk in, one of the very first things you see is the mountain in the middle of the store. 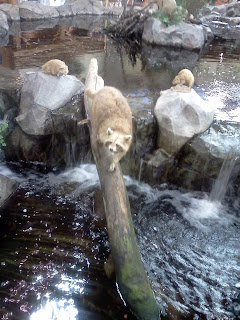 The size of this display is also amazing.  On one side of the mountain there is an actual waterfall and pond filled with live fish.  Kara loves raccoon, so she really enjoyed seeing this one up close. 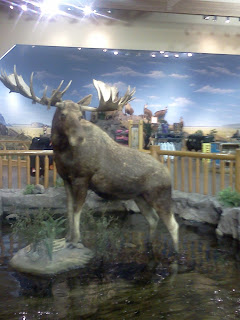 In the middle of the pond stands a massive moose.  Even though he is quite big, he is not the biggest animal in the store. 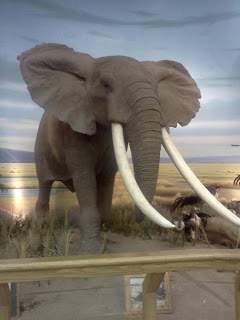 That honor would go to this elephant from Africa.  It is so crazy to  be standing next to an elephant in the middle of a store. 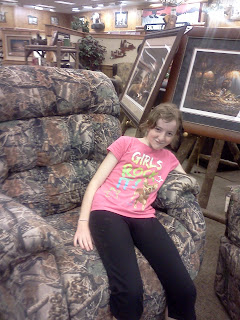 At one point the kids wanted to sit down for a minute, and did so on a camo color couch and sofa with hunting scenes all over it.  It was quite an interesting look. 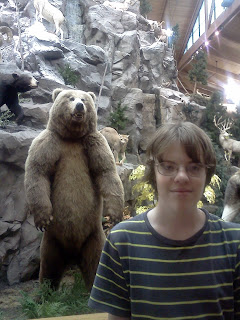 Kyle's favorite display with the giant standing brown bear.  You might have see this picture on Instagram a few days ago.  I shared that I hope this is the closest he ever comes to a bear. 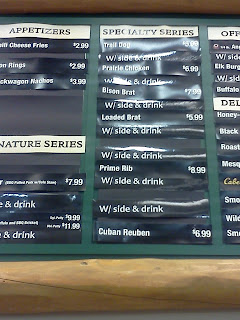 We considered eating in the cafeteria.  Kyle really wanted to try the buffalo burger.  The girls would have no part of it.  I can't say that I blame them, there wasn't too many things that I was willing to try other than the fries or salad.  Instead of trying the game, we settled on a stick of beef jerky, and dinner at Arby's down the street. 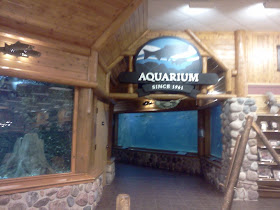 We also walked through the store Aquarium that is going to be remodeled soon.   This is where we were when we got the call that mom's train had left the station on time.  We stopped in the kids section, and Kara found a stuffed fox that she wanted bad enough to use her own birthday money to buy it.  We spent over an hour exploring the store, and will probably even go back again. This week we will be going on another Summer Fun Challenge day trip, this time with grandma.  Stay tuned to see where we went!