If you have a Pokemon lover in your house like  I do, you know that the new games Pokemon Black and Pokemon White were released on Sunday March 6.  My son has not let me forget it.   A few years ago when my son turned 8 he wanted to have a Pokemon themed birthday party.  At the time,  there were no new games coming out, and there were no Pokemon party supplies available.  I had to "make them all".   We were talking last night and he told me that his Pokemon party was his very favorite birthday party that he has had.

With the release of the new games and there will be a new wave of popularity.  I can imagine there will be many requests for Pokemon parties.  While Pokemon Party supplies are available now  at places like Birthday Express , I thought I would share our party ideas to throw that perfect Pokemon party. 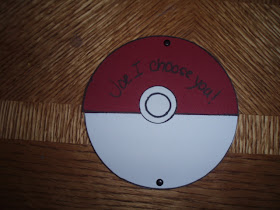 The first thing I needed to do was come up with an invitation.  I decided on Pokeballs.  I cut two white circles and a red circle that were the size invitation that I wanted to send.    I used one circle still in one piece  as the back part of the invite with all the party information.   For the front  I cut the red circle  and the 2nd white circle in half.  I put them together to look like a pokeball.  I used brads to attach them to the bottom circle.   The half circles on the top  were able move so the recipent could read the invite.  For a final touch a attached a smaller white circle to the red half, but let it overlap on the white half to look like a real pokeball. 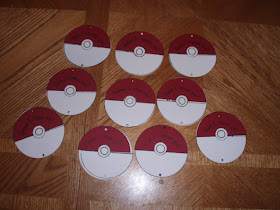 On the front of the invitation, I wrote each childs name and I choose you!
On the inside I wrote... 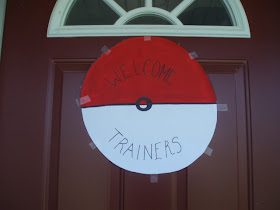 On the day of the party I  had a large Pokeball made out of poster board on the front door welcoming the  Pokemon Trainers. 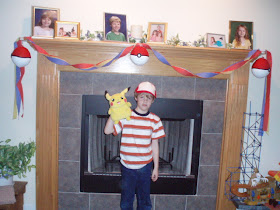 One tradition that I try to do at all my parties is take a picture of all the kids with part of the theme.  This is my son wearing his special pokemon trainer hat holding Pikachu.  I decorated the fireplace with red, yellow and blue streamers and Pokeball pinatas that I had made. 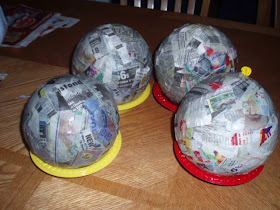 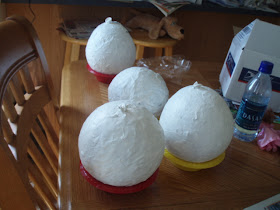 When the paper was thick enough and dried, I painted each ball white. 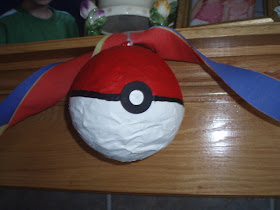 I painted the top half red and added the black details.  Because they were decorations and not the acutal pinata,  my son still has these a few years later 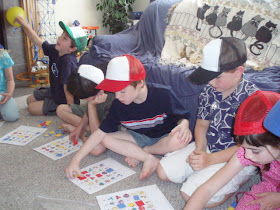 Once all of the children arrived, we played Pokemon Bingo.  There is a great website where you can make customized bingo boards of all kind that you can find here    The markers were red, blue and yellow squares that cut from cardstock. 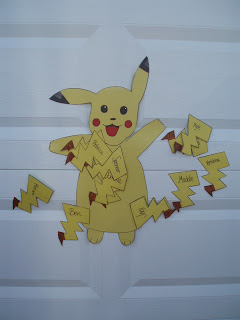 We then played Pin the Tale on the Pikachu.   I drew Pikachu on poster board and hung it on the garage.  We also play this game but with different themes.  We have had pin the tail on the cat,  pin the hat on Madaline,  pin the cherry on the sundae and much more. 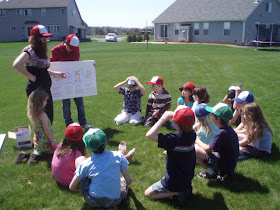 It was a gorgeous spring day.  We went outside for a Pokemon lesson.  I had my son pick his 20 favorite pokemon.  I did a little research about those 20 and we had a mini lesson.  The reason for the lesson was for the next game.    Got to Find Them All. 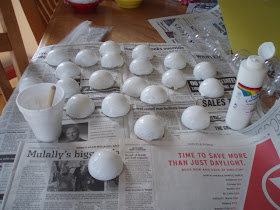 I dont have a picture of the final pokeball.  I painted plastic ball ornaments that I found at the craft store white and red to look  like a pokeball.     In each pokeball, I placed a picture cut out of one of the 20 pokemon that the kids learned about. 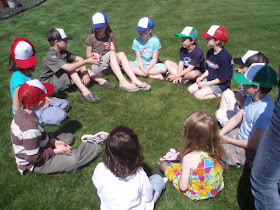 To find out which pokemon each child would be assigned, we played pass the Pokeball. (like pass the potato) Instead of being out, when the music stopped that was their pokeball. 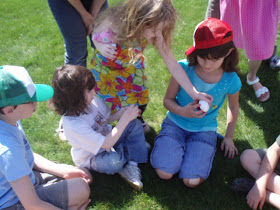 You can kind of see what one looks like in this picture. 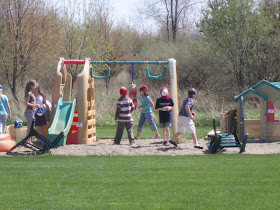 One everyone had their pokeballs they had to search the entire yard to find 3 more pokemon (printed on small squares) that matched the Pokemon in their Pokeball. 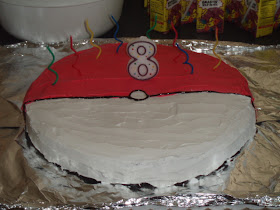 After games it was time to eat.   I decorated the table with a blue tablecloth and alternated red and yellow plates and napkins.  I can not remember the food we ate that day but I am sure I themed it out.  LOL!
I made a Pokeball cake.  It was an easy cake to make.  Just make a circle cake and decorate with red, white frosting.  The fine black line was writing gel. 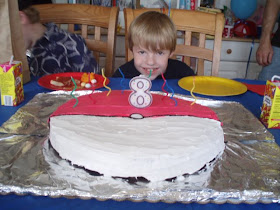 As you can see in this picture, he LOVED his cake.

We opened gifts and then it was time to go home.

For their take home goodie bags,  I had decorated colorful paper bags with the words.

Pokemon Master and added their name.

Some of the goodies I can remember were pencils from Oriental Trading that said Pokemon Master
Pokemon Stickers I bought from Ebay and thier plastic Pokeballs.  They also each kept their trucker hats (that are worn on the show)

It was a very memorable day and he still remembers it fondly 4 years
Pams Party at 2:24 PM
Share