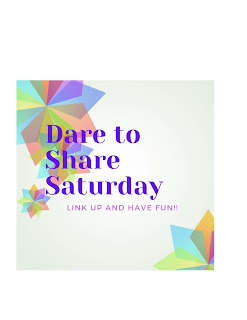 It's Friday night and you know what that means..
It is time to Dare to Sare!
Happy Fall Friday Y'all!
I'm not actually from the south, but a lot of my family members have grown up there or lived there for over 20+ years, so I like how that sounds. :)  How was your week.  Mine was a bit crazy.  Things started a bit slow and then mid week we had a power line go down near our school just as many of the kids were arriving.  The generator kicked on so there was some light but we were out of most of the electricity at our school, the neighboring elementary school and the surrounding neighborhood.  There was no running water or internet and the power was not predicted to come on for several hours.  We had not choice but to cancel school.  Since we had many of the kids already dropped off, we had to contact parents and wait for them to be picked back up.  The power was already off when the buses started to arrive to they just kept the kids on the bus and return as many as they could back home. It took 90 minutes to get everyone safely to where they needed to go. All the teachers, support staff and some volunteers worked together, which was really cool to see.  Thankfully this outage was not as bad as the time when my son was in intermediate school.  At that time the power outage happened in the middle of the day and all 900+ kids were in the building. It was also very early in the school year so it took a lot longer to get everyone picked up.  I was on the parent side that time and not working at the school.      Yesterday a bit more craziness as we had more people out than we had subs, so I was covering two people. On top of that we had a lock down drill which cause a bit of anxiety, but the class I was in did great!  With everything going on this week, I did not have a chance to write a post. I have a couple planned, so hopefully they will be up in the next few days.
Let's get this party started!!  Link up and HAVE FUN!!