Our experience with Every Plate 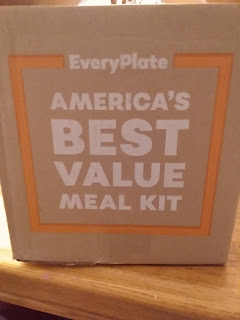 I have been thinking about trying a meal kit for quite awhile. It never seemed like the right time. When my kids were younger, I thought they were too expensive, and might not have food my children would like to eat.   Recently I had a conversation with a couple of my teacher friends, one was the teacher who I subbed for during her maternity leave.  She was telling us that she had received a meal kit after the baby was born.  She really liked the convenience, but was not sure if it was the right one for her and her family. The other teacher mentioned a couple of plans she thought might be a better fit.  One of those she  mentioned was Every Plate, and said it was one with a very affordable price.  When I got home that day, I looked into it.  She was right, it was cheaper to get a meal kit for three meals than it was to go out to eat once.  I asked my daughter if she would like to give it a try, and she said yes!  We ordered our first box,  which was scheduled to arrive a week later. 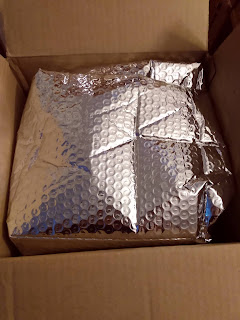 On the day it was supposed to arrive, I received an email from the company.  It said they had received word that there was a slight delay during shipping, but they were working hard to get it to my door as soon as possible.  They assured me it was packaged in such a way it should be okay for an additional couple of days.  They also told me if there were any problems at all, to call customer service and they would help solve any issues.  There was nothing to worry about though. The next morning I received notification that it had been delivered.  I contacted my daughter who promptly brought it in, and put everything in the refrigerator while I was at school.  Inside the box was a thermal bag, then inside the bag were 3 large ice packs. One on the top and bottom of the food and one between the produce and the meat. 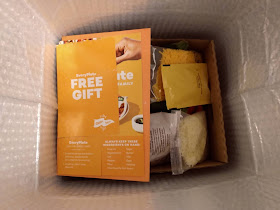 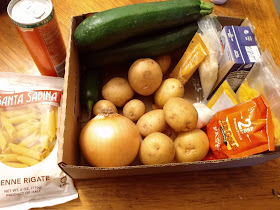 Under the first ice pack was a box of produce, and other miscellaneous ingredients for our chosen meals. We also had an extra drink in the box, with a card that said here is a free gift to try. 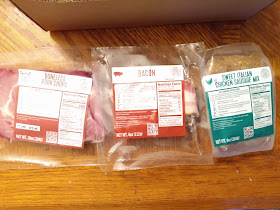 Under the box of produce, was the meat for our chosen recipes sandwiched between two more ice packs. They were packaged in tightly sealed packs, and the right amount for our 2 serving meals. 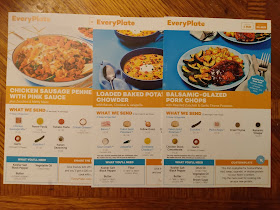 The meals were chose were Chicken Sausage Penne with Pink Sauce, Loaded Baked Potato Chowder, and Balsamic Glazed Pork Chops with Zucchini and Potatoes.  We both wanted our first meal to be the pork chops. (you can chose chicken as an option instead of pork for a small upcharge) 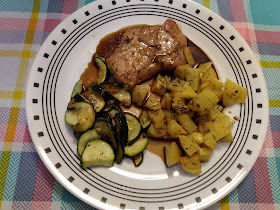 I am already seeing an unexpected positive thing happening with receiving this meal kit.  I am spending more quality time with my daughter.  We decided we should work together to make these meals. She has been preparing and cutting the produce, while I have been cooking it at the stove.  Not only does working together cut down on time to to make each meal, we are both invested in the outcome.  WOW! We do not normally eat a lot of pork chops, but we both agreed this meal was DELICIOUS!  We ate every single bite. 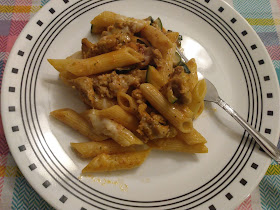 Our second meal was Chicken Sausage Penne with Pink Sauce. We also liked this meal. There are a few minor tweeks we would make though, if we were to try it again. It had a bit too much sausage for our tastes, and not quite enough cheese. We have even talked about trying a meatless version on our own with the recipe card. 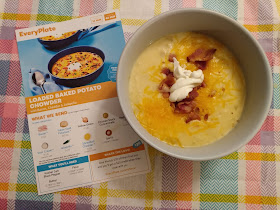 Our last meal was the Loaded Baked Potato Chowder with Bacon and Cheese.  They did send a jalapeno to add, but we chose not too since neither one of us like jalapeno. While making this chowder, I was a bit concerned because it called for an entire onion.  The onion they sent us was pretty big, and I can not eat a lot of onion.  Instead of putting in the full onion, my daughter put in 3/4 of it instead.  I rarely make soup from scratch, but this one was easy and ready in less than an hour.  This recipe was another WOW!. We both agreed this recipe was a keeper, and we will be making it again. It was flavorful, and cheesy just the way we like it.
Out of the three meals we tried, we loved two, and liked one. Pretty good stats. That is definitely a reason why we are going to try another box. 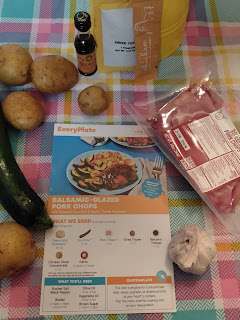 This is not a sponsored post.  I am sharing about Every Plate because we had such a good experience, and I think others will like it too.  If you would like to try Every Plate you can choose plans with 2 servings or 4. You can also choose how many meals you would like to receive for the week, 3, 4, or 5.  My daughter and I are doing the smallest plan 2 servings, 3 days a week because that works best for us.
Do you think you would like to give it a try?  Here is a link to a $20 off credit for your first box.
I would love to hear about it if you decide to try it!