Our visit to Mackinac Island 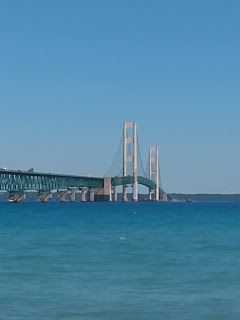 After we saw the sunset in Petoskey (read about it here) we moved on to Mackinaw City for the night.  The next morning we stopped at the Old Mackinac Point lighthouse, and to see Mackinac Bridge from the shore.  It is the the bridge that connects the lower and upper peninsulas of Michigan. 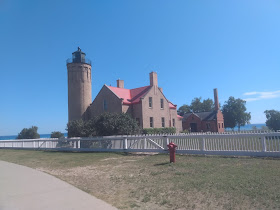 The lighthouse is another nice one that we would like to go back and visit when it is open to the public again.  It has such a pretty view of Lake Huron and the Mighty Mac.  (the nickname for the Mackinac Bridge)
To get to the island, you need to take a ferry.  You can take a ferry from Mackinaw City, or you can cross the bridge and take one from St. Ignace. We decided do the latter, because we were planning on going north into the Upper Peninsula after our trip to the island. 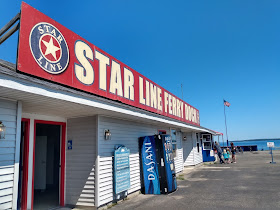 There are a couple different ferry companies to choose from.   we chose to take the Star Line.  Since we had about 45 minutes before our ferry was due to leave, we decided to check out the small lighthouse that was very close by. 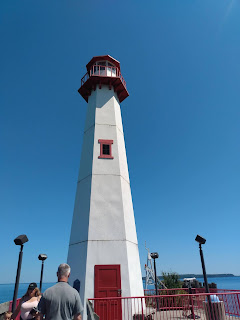 This is the Watawam Lighthouse.  It is much  different than the other lighthouses we saw on our trip.  It was built in Monroe, Michigan and then moved to St. Ignace in 2006. 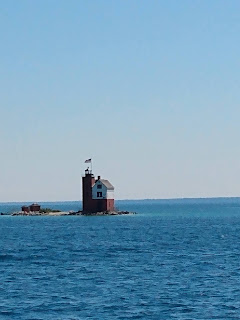 While on the ferry we passed the Round Island Lighthouse. It was built in 1895 and help the ships find their way through the Straits of Mackinac. 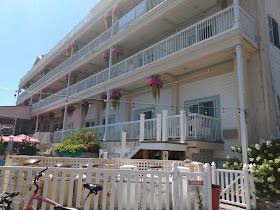 When the ferry pulled into the dock, this is the first beautiful building we saw. The pink flowers were gorgeous. 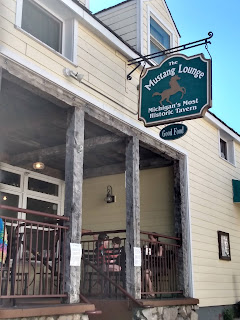 The Mustang Lounge claims to be Michigan's most historic tavern.  When I went to find out why, I saw that the building is made from 200 yr old timbers from the fur trader warehouse that used to be located there. 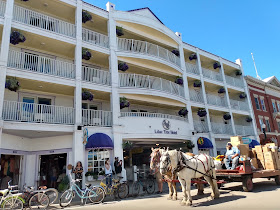 The Lilac Tree Hotel is the only all suite hotel on the island. As you can see there is a horse drawn carriage hauling supplies parked in front.  There are a lot of horses on the island, because cars are prohibited. 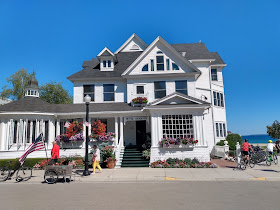 This beautiful bed and breakfast has a beautiful of the water and belongs to a relative of a friend of mine. 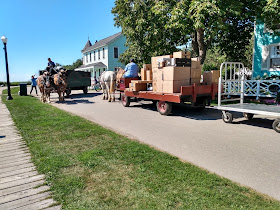 This is the equivalent to a traffic jam on the island.  A carriage carrying supplies to the Grand Hotel and the trash carriage met up at the corner. 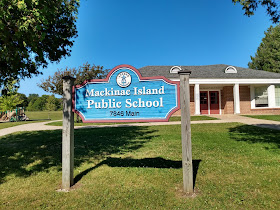 There are approximately 500 people who live on the island year round, and this is where the children go to school. 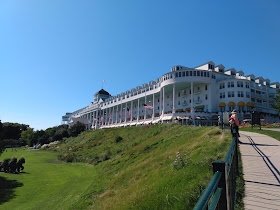 The Grand Hotel is probably the most famous building on the island.  You may have seen it in the movie Somewhere in Time.  It was built in 1887, and every single room is decorated  differently.  It is also pretty expensive to stay there. We checked the prices the week we were there in August, and they were over $700 a night. There is also a $10 a person fee is you are not a registered guest, and you want to go up to the grand porch for pictures. We decided not to do that this time, but might on our next visit. 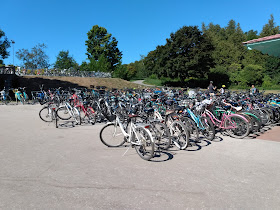 The main type of transportation on the island is the bicycle.  They are everywhere, and can be rented for the day. This was the bike parking lot outside of the Grand Hotel 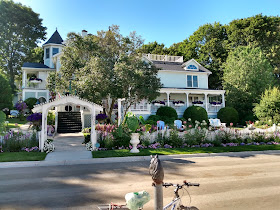 All of the buildings on the island have historic significance. This beautiful house is the medical center. 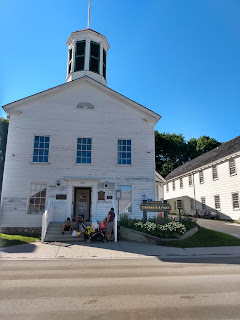 If you get in trouble while on the island, this is the police station and courthouse. 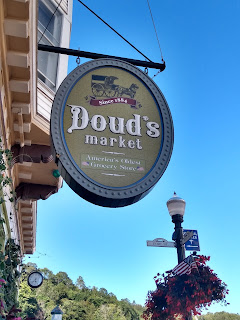 Douds Market is America's oldest grocery store. It was founded in 1884 by James and Patrick Doud. 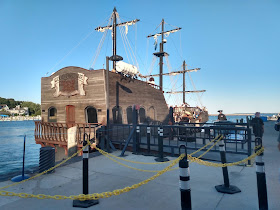 After dinner the sun began to set, and we knew it was time to head back.  The last ferry back to the mainland was at 9 pm. We decided to go back on the 8 pm ferry just in case it was too crowded.  While waiting for our ferry we saw the pirate ship ferry that we did not know about until the end of the day.  It looks like fun, and we might try it next time. 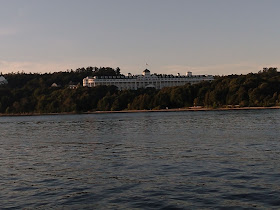 One look back at the Grand Hotel as the sun began to set.  It was such a beautiful day and visit. We will definitely be going back again, hopefully one day soon!