Our trip to the Michigan Upper Peninsula 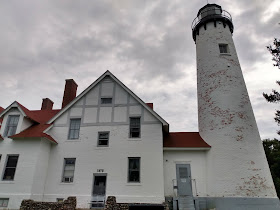 Only a couple more posts from our vacation around Michigan.  Today I am going to post about what we saw in the Upper Peninsula.  There were many places in the UP we were not able to see on this trip, but we definitely hope to go back to see next summer.
The night before, we had left Mackinac Island and Lake Huron and drove to Sault Ste. Marie. I lived in Sault Ste Marie for a short time as a baby while my dad was in the Air Force. There used to be a base there. It was many years ago though, and I do not remember any of it.  We started the day at the Soo Locks.  We arrived just as a big ship was going through the locks but we were not paying attention. We did not realize that it was just about lunch time and the locks were going to close for an hour so the workers could have time off to eat. 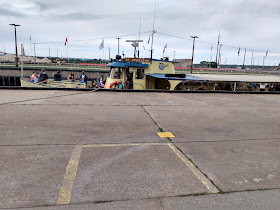 After waiting an hour while the lock workers were on break, we waited about 20 more minutes before a boat came through.  While it was  not another big ship, we finally got to see how the locks worked. 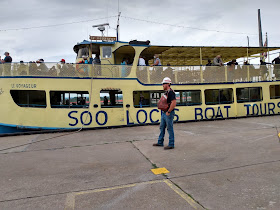 I did some research on the locks. The reason why they exist is there is a thick layer of bedrock holding the waters of Lake Superior from where it joins the St. Marys river.  There is a big drop from that area to lower great lakes, which ships could not make it on their own. The gradual raising and lowering of the water in the locks allows safe passage between the two bodies of water. 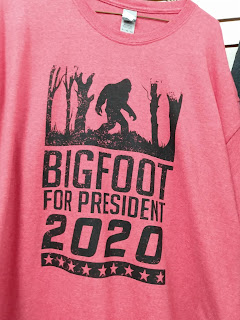 I saw this T shirt in a gift shop in Sault Ste. Marie. I found it humorous because the Upper Peninsula is known for having several Big Foot sightings.  It makes sense because it is also where the Hiawatha National Forest which is almost 900,000 acres is located. 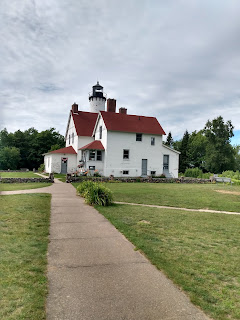 After leaving the locks, our first stop was the Point Iroquois Lighthouse. It was about 20 miles west of Sault Ste Marie.  Built in 1870 on the shore of Lake Superior it helped guide the ships coming and going through the Soo Locks. 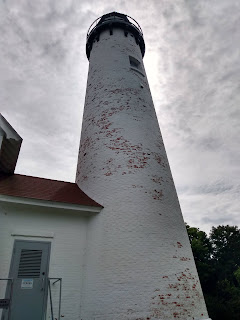 We would have been able to take a tour of the house and tower if it was not closed because of Covid. 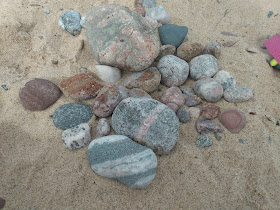 Right next to the lighthouse was a small beach.  If you love rocks, then you will NEED to make a trip to Lake Superior.  The rocks you can find along the shore are amazing. The colors are super vibrant when wet, and have many layers to them. 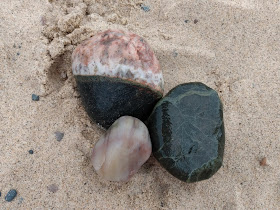 These were some of our favorites. 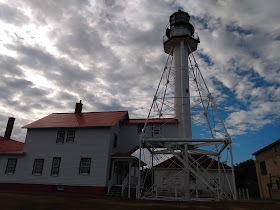 Our next stop was Whitefish Point Light Station in Paradise, Michigan. It is the oldest active lighthouse in Lake Superior.  This area is also called the graveyard of the great lakes because more ship wrecks have happened in this area than any other part of Lake Superior.  One of the most famous wrecks was the Edmund Fitzgerald which became well known because of song by Gordon Lightfoot. 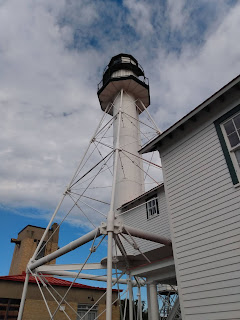 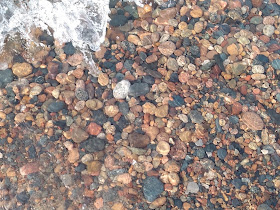 Next to this lighthouse was another beach. It was a bit more crowded with people looking for rocks. I wish my picture would show more of the colors. We found many more beautiful rocks to add to our collection. 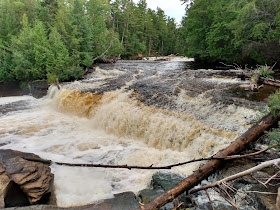 A few miles down the road from the lighthouse was the Tahquamenon Falls, also located in Paradise Michigan. Located in the second largest state park in Michigan, there are two parts to the fall, the lower and the upper.  We started at the lower part of the falls. The water is brown in color because of tannins that leach from the cedar swamps at the start of the Tahquamenon River.  It is nicknamed root beer falls, and I have to say it did remind me of root beer. 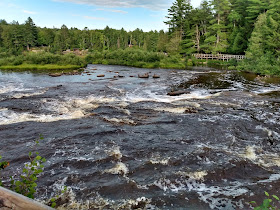 It was starting to get later in the evening so we left the lower fall and hope to see the upper falls before dark. 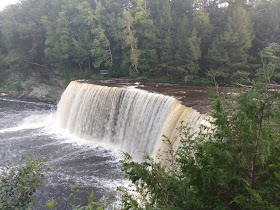 Thankfully we made it in time.  The upper falls were quite a sight. They are 200 feet right and 50 feet deep, and of the biggest waterfalls east of the Mississippi River. 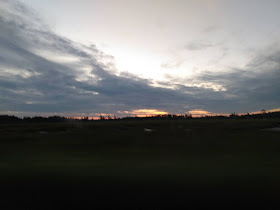 We think there was a nice sunset that night, but we could not tell, there were too many trees in the way.  We did have an interesting night that night.  I think I mentioned in one of my posts that we did not make reservations during our trip.  We just went to where we felt like staying.  This night was the only night that it was a problem.  As it was getting late, we drove through Newberry, where there was not a lot of places to stay. We drove 45 more miles to Manistique hoping to find a hotel. We found plenty of hotels, but they were all full. By this time it was about 10 pm.  We had to drive 60 more miles to the town of Escanaba before we found one a room. Part of the problem was it was a Friday night when many people travel to the UP. We did not think of that earlier in the day or we might have called ahead and made reservations. Everything turned out okay in the end though, and now we know what to do on our next trip.   Our next stop, the Wisconsin Dells and the Navy Pier.