After a couple week delay (because of a broken computer) I am finally back to post about our vacation all around the state of Michigan.  If you missed the first post, click the link to see Our visit to Holland
Grand Haven 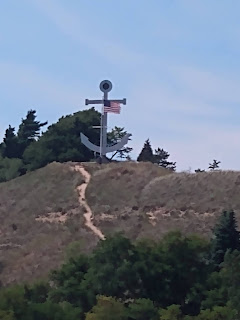 Our first stop in Grand Haven, which is just north of Holland, was the state park. There you could see the harbor and lighthouse.   On top of big hill over looking the harbor there is a large anchor in honor of the Coast Guard.  Grand Haven is called Coast Guard City USA 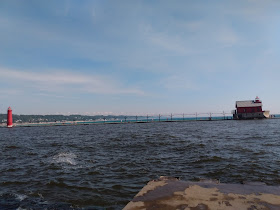 One thing interesting about the lighthouse in Grand Haven, you get two for one.  The Inner and Outer Pierhead.  The inner tower was built in 1905.  The outer building was built in 1875 and originally in a different location. In 1922 the pier was rebuild with a concrete pierhead, and the outer building moved to that location. At the time it contained a state of the art foghorn. 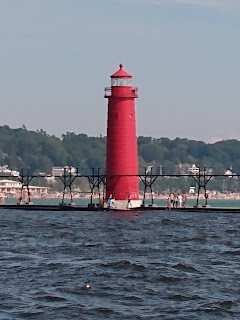 A closer view of the inner light, and the bridge connecting the two buildings. 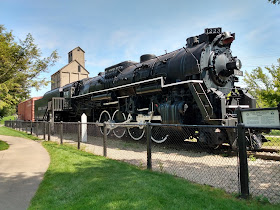 Near downtown Grand Haven we stopped to see the Pere Marquette 1223.  It is one of only two surviving 1223 2-8-4 Berkshires.  I don't know a lot about trains, but my travel companion did. It was constructed in 1941 and used to move heavy war equipment.
Another great place to visit in Grand Haven that we did not get to see this year, because it was shut down for Covid, is the Grand Haven Musical Fountain.  We used to bring my kids there when they were young and watch synchronized music and light shows. (maybe next year!)
Ludington 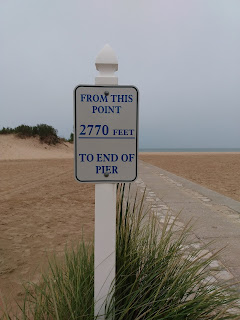 If you like lighthouses, you need to stop in Ludington.  There we saw two of my favorites of the entire trip, and we saw A LOT of them.  The first stop was the Breakwater.  To get to the lighthouse, you have to walk out on a concrete pier over the water.  This sign is at the start of the walkway. 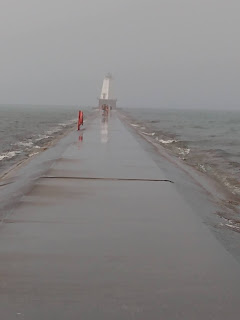 You can see the lighthouse, the walkway and lighthouse through the fog in this picture.  I was definitely nervous walking out on the pier.  It was a windy day, and water goes over of the walkway.  On extremely windy days there is a risk that you can be washed off the pier if the waves are big enough. I saw several families with kids walking out there too, so I put on a brave face and did it. 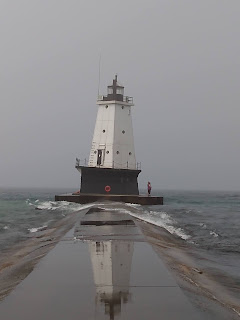 When we were almost there, the waves got a bit bigger.  I moved very fast at that point. The water was about ankle deep and very cold. 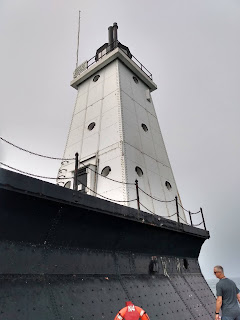 Up close the lighthouse was cool to see. It reminded me of a big ship. The current version was built in 1924.  A car ferry called the S.S. Badger that takes cars from Ludington to Manitowac, Wi, passes by the lighthouse a few times a day. 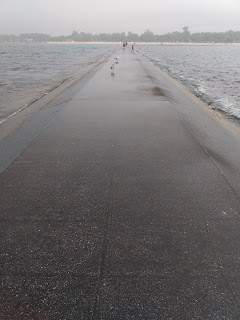 Once we were done looking at the lighthouse, I remembered we had to walk back. It seemed a little less scary, but the waves had died down a bit. 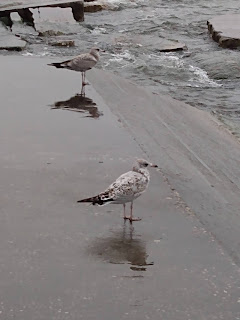 We made a few friends on our way back to the beach.  Even though the walk to and from the lighthouse was nerve wracking, I am so glad that I did it. 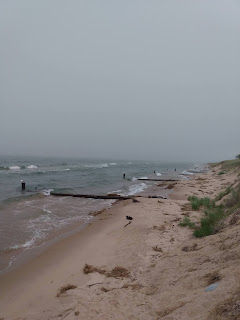 After leaving the Breakwater on the way to the Ludington State Park, we stopped on the side of the road at a lookout spot.  There we saw some interesting small piers with places to tie your boat. Every single one had a seagull on the end. I am not really sure what they are for, but I am guess you can come in and tie you boat in case of bad weather. 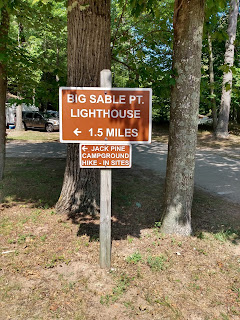 Going to see Big Sable Pointe Lighthouse was also an adventure.  At the start of the walk you see this sign. To get to there you have to hike 1.5 miles along a path that is sometimes paved and sometimes sandy. It does not sound like it would be that far, until you are actually walking it.   A lot of people rode their bikes on the path. 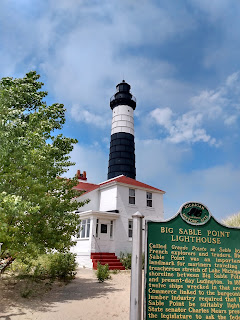 The long walk was well worth it. It was beautiful. The building and tower were built in 1867.  The constriction materials were delivered to the site by ship, because there was not a road until 1933.  It was the last Great Lake lighthouse to get electricity and plumbing which was not until the late 1940s! 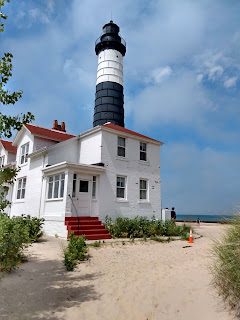 The tower is 112 feet tall. It was not open to the public this year, but the platform that you normally can walk up to see is 106 feet. 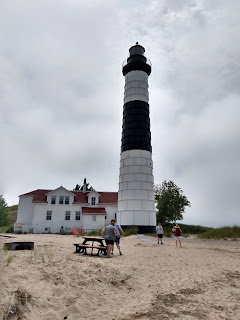 We spent some time on the beach at Big Sable Point, because we had to rest before our long walk back to our car.  We definitely got our exercise that afternoon. 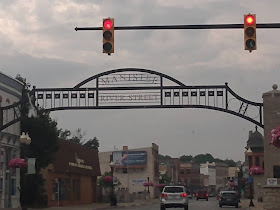 After leaving Ludington, we headed just a little bit more north to Manistee. The weather was starting to look a bit dark, because there was a storm heading our way. 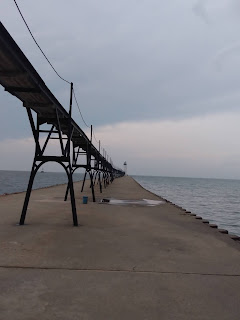 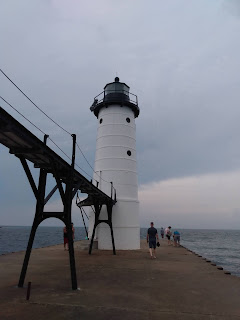 I just learned some interesting facts about the Manistee North Pierhead Lighthouse. It was originally built in 1869. In October 1871, on the same day as the great Chicago fire, storms caused fires in many other cities.  Most of Manistee also burned down including the lighthouse.  A new one was built in 1872. The wooden walkway added in 1879, was a safer way for the lighthouse keepers to access the light so they could maintain it. 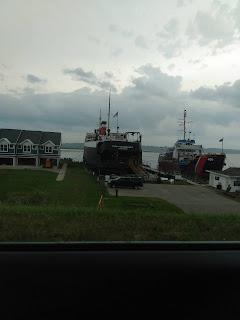 As we were driving out of town, I noticed an unusual sight.  Two ships were docked right next to a condominium complex that was being built. We did take a closer look and were surprised to see there were only about 20 feet between them. 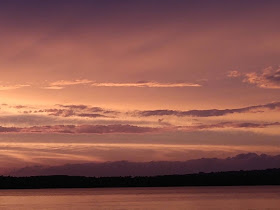 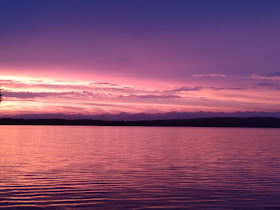 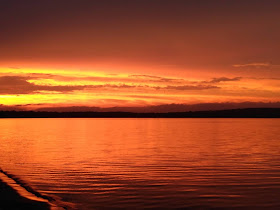 We made it out of the path of the storm in time,  and arrived safely to Traverse City for the night.  There we saw probably the most beautiful sunset I have ever seen.  It was so vivid and colorful. It changed from purple, pink, red and orange. I hope I am lucky enough to see one like that again.
There are several more locations I will be posting about so stayed tuned!..
Pams Party at 10:14 PM
Share