In a couple of weeks the 2018 Winter Olympics will be starting in Pyeongchang, South Korea.  It is the smallest city to host a winter Olympics since Lilliehammer in 1994.  The winter Olympics is usually smaller than the summer, because there are less countries competing. Not all countries participate because many are from tropical parts of the world, and do not have athletes that compete in typical winter sports. 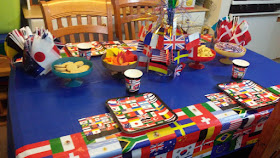 I love watching the Olympics, both winter and summer, so when I had the chance to prepare for a Winter Olympics themed party, I jumped at the chance.  I am a brand ambassador for Oriental Trading. They do send products for me to review, and use in my posts, but all opinions about the products and Oriental Trading are 100% mine.

Many of their Olympic (International Games)  products were centered around a flag theme. The tablecloth, tableware, and centerpiece all had flags from around world on them.  Not only are they very colorful, you can have a geography lesson guessing which flag matches the the different countries. 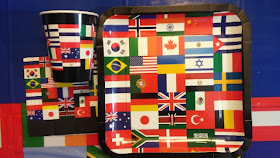 This tableware works for both the winter and summer Olympics. 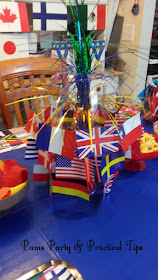 The centerpiece was very easy to set up, and I love how colorful it looks in the center of the table. 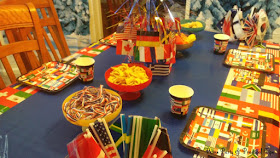 A couple of years ago, I found small colorful cake plates on clearance at Target for under $3. I brought them out for this party because they were the perfect colors and reminded me of the Olympic cauldron lit by the last torch bearer. 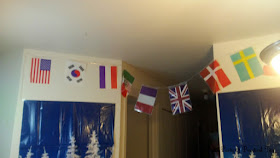 A fun decoration was the flag pennant that my son helped me hang across the dining area. 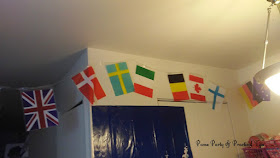 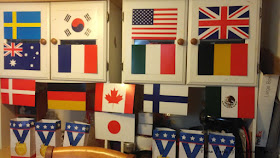 I also hung up a pack of cardboard flags of different countries participating in these games.  I will be honest, I had to look up a few. These can be used for decorations, or for a guess the country game. 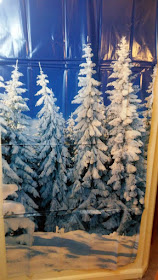 This winter back drop scene is currently on sale.  It comes in three panels, and if hung all together it is 9 feet across by 6 feet high.  I thought it would be perfect for a photo booth. 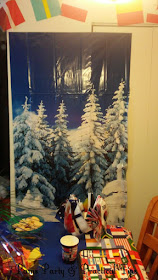 I do not have a wall big enough to hang all three panels so I hung one by the dining room table as well. 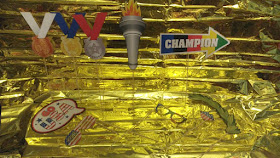 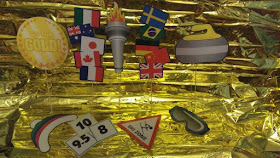 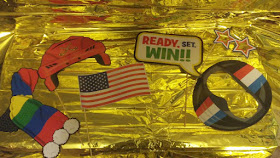 The winter Olympics photo prop pack, has all of the above props in one set. 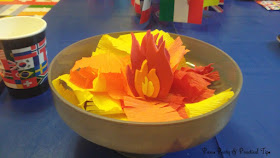 I asked my daughter if she could cut out some flames to make an Olympic cauldron. I was not specific on the size, so what she made was a little on the small side. I added a few of the streamers from the Unicorn Candy Buffet Back Drop to make the flame fit a bit better. I love how it turned out. 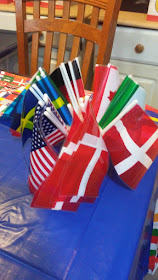 A fun party game idea is to hold your own Olympic games in the yard.  This flag of countries pack came with 72 flags from 15 different countries.  The guests could be divided up into teams, and pick which country they want to represent.   I placed them into two cups on the table so guests could choose a few to take home to cheer on their favorite athletes from around the world. 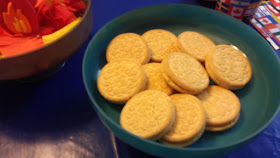 I had planned to make a few snacks today, but woke up not feeling well. Instead I kept it simple with "gold" cookies to look like gold medals, and Bugles to look like mini torches.  A ribbon can be added to the gold cookie medals with a box of Fruit by the Foot.  (I still have a few Olympic food ideas which I will share as the games get a bit closer, and I am feeling better.) 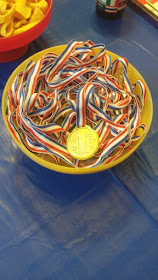 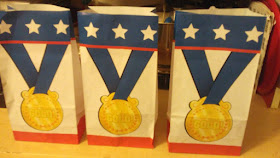 Setting up the supplies for this posts, and seeing all of the colorful items has made me even more excited to see the Olympics.  I hope it has you excited too!