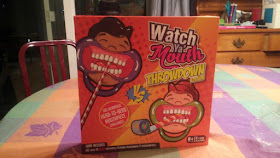 Disclosure: I am an US Family Guide Blogger.  I received this game to review for my readers.  All opinions are 100% mine.

This past week I received the game Watch Ya' Mouth Throwdown Edition to play with my family.  We knew the perfect time to try it out was over Thanksgiving when we would be eating dinner with friends.   I played the game with my friend who is a nurse, and three apprehensive, grumpy teenagers. 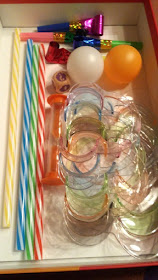 We had all seen the first version of the game on TV,  but none of us have played it before.  When I opened the game we found a lot of colorful game pieces. 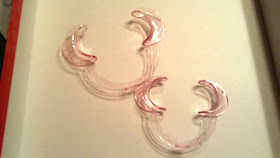 We followed the directions, and washed the mouthpieces we had chosen to use.  My friend the nurse made sure we kept things sanitary.  She had just gotten over a cold, and joked that if we did not prepare the game properly, we would have to call it "How to Catch a Cold" game.  They are top rack dishwasher safe, which seems like a great way to clean them before and after playing.

I have a very small mouth.  As hard as I tried I could not get the mouthpiece in my mouth, that is when I realized that there were TWO sizes, large and small.  I had been trying to use the large adult size, but luckily the smaller child size fit. 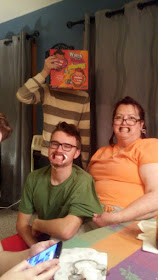 I have to admit when you are wearing the mouthpieces you look pretty ridiculous. (though that that is part of the fun of it)  My daughter would not let me take a picture  of her wearing it, and my son hid behind the box.   My friend's son was  brave and allowed me to use him as the model in my photos.

In the game you go around the table, and roll a die with arrows on it.  Depending on how it lands, it will show you who you are challenging   You the pick up a Throwdown card, and follow the directions it tells you to do.  The instructions say you can not pass on a Throwdown.  Some of the challenges are very difficult, so I made the executive decision to allow passing, so my players would stay in the game. 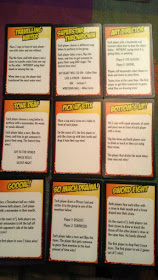 We noticed that this game is for ages 8 and up.  Some of the cards may be too hard for younger players. On one of the cards you had to sing a song with the mouthpiece in.  The teens we played with were ages 16, 17 and 18, and not one of them knew who Frank Sinatra, Marvin Gaye, Aretha Franklin, and Neil Diamond on the were.  I even sang the songs associated with them without the guard, still clueless. They did redeem themselves with knowing PRINCE, and Elvis Presley though.. (I'm a 80's kid, who loves Prince) 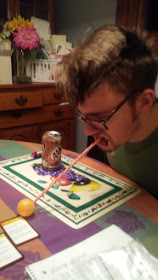 You use different props (and add some of your own)  Here Noah shows demonstrates one of the games with the straw.


If you find the challenges are too hard, you can still  play the original version by using the phrases deck.

If you are not a fan of looking silly, and trying new things this may not be the game for you.  However, if you were a fan of the first game, you will probably love this one too.   It is a great game for parties and large groups.