Time with My Teenage Son 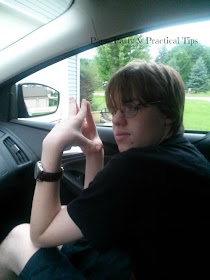 This week we have been busy with back to school activities. Both of my older kids had their high school registration days where they got their schedules, and I got to pay fees.  This week we also had time to do something special...


I had the chance to spend some time with my teenage son.  He read the book The Giver, in middle school, and he really wanted to go see the movie version that opened up this week.  As boys get older, they don't always want to spend time with mom. He occasionally likes to go to the grocery store with me, but that's because there is food involved. I don't think  we have gone to the movies together just him and I. One of his sisters  usually wants to go along as well.    I had told him that we were not going to leave to the theater until I got at least one picture of him.   That is why he is giving me that look in the picture. 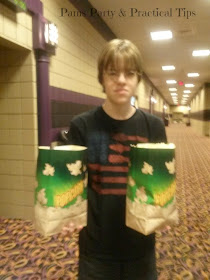 We drove to the theater with a rainstorm brewing overhead. It was really starting to look scary out.  I almost turned around and went home.  We decided to try and make it inside before the clouds let loose.  We made it just in time. Just a minute after we arrived, we could hear the rain coming down.  Before taking our seats, I asked for another picture, and got another look.  One of these days I will get a smile out of him on camera. One thing that I love about our local theater during the summer is they will have free popcorn days once a week. We chose to go on free popcorn day, which saved a ton of money.

We both really loved the movie. There were a lot of parts that were true to the book, and a few that were changed to movie purposes.   When it ended, both of us wanted to know what happened next.  If there is ever a sequel made, we will definitely go.

Time is flying by too fast. He only has a few more years of high school left, before he is off to college. Hopefully they will be time for  more special days with my son.