Disclosure: This post contains affiliate links to products I used during this party. All opinions are 100% mine. 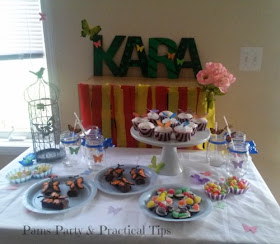 My daughter has always been an animal lover.  She has had many parties based on animals such as her Cat Party, Zoo Party, and Woodland Animal Party.  This year she decided to go with another animal, and do a Butterfly theme. 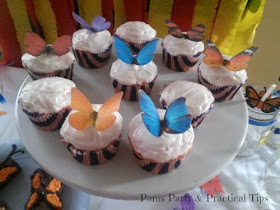 We made basic cupcakes with white frosting, because the large edible butterflies

were so colorful and beautiful.  They really did look like real butterflies sitting on top of the cupcakes. . 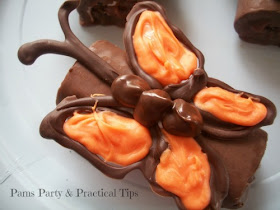 I will be sharing how I made the Butterfly Swiss Cake Rolls in a tutorial later this week. 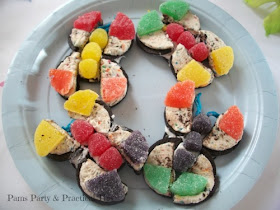 We had decided to make some Oreo Cookie Butterflies as a treat.  We found something similar online here.   Kara did not want to add frosting and wanted to make large spots in the corners of the wings so our butterflies look a little bit different (and messier) than the original. We also changed the antennae color,because most of us do not like black licorice.   The girls thought they still taste great, even though they were not perfect. 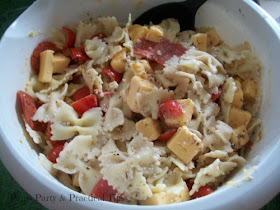 Now that my daughter is a teenager, she wanted her party to be a little more casual.  We served dinner type of foods because it was a slumber party, and started late in the afternoon. She did not want me to make fancy names for the menu, which was okay by me.  I still snuck in some Butterfly Pizza Salad though.  I have made this for past parties, and you can find the recipe here (Pepperoni Pasta Salad)  For the rest of the menu we picked had pizza, bbq meatballs, chips and pop.  I had planned on putting out some fruit too, but all of the girls said they had more than enough food. 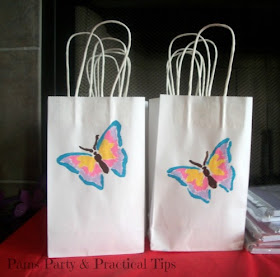 In the goody bags we had mini notebooks, decorative mirrors, ice cream erasers, butterfly and flower shaped frames from the dollar spot, and butterfly candy bags. You will see the candy bags shared in another post. 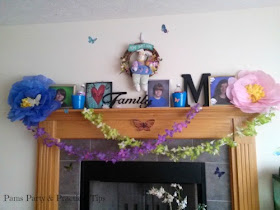 We had a lot of fun decorating for this party.  There were  butterflies everywhere.  It felt like we were in a butterfly enclosure.  We used these Colorful Butterfly Decals

. mini paper butterflies from a paper punch, and three dimensional butterflies from the craft store.   The large tissue paper flowers were from a tutorial on Uncommon Designs. They turned out so cool looking. The only thing I changed from their pattern  was I did not add the largest petals. 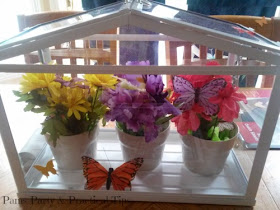 I found this awesome tabletop greenhouse on our last trip to Ikea, I knew it would be perfect to turn into a Butterfly House Centerpiece.  We put in some flowers, and several realistic butterflies.  Now that the party is over, we can use the greenhouse for actual plants.

We had a few activities and a snack planned for the party that we did not end up doing,  Kara told me that she did not want planned activities and games, but to leave them as optional if they felt like doing them.  Again it took the pressure off of me at the party but I still want to share them here on the blog.  Watch for those tutorials in the next week or two.