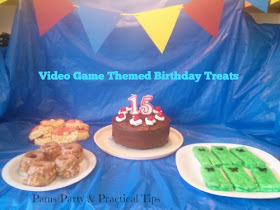 My son's 15th birthday was this week.  I wanted to do something special for him, but I wasn't sure what.   When he told me he wanted a chocolate cake, I knew I had my answer.  His favorite thing to do is  play video games. One of his favorite games to play is Portal, and in the game there is a special Portal Cake.  When i saw a picture of the Portal Cake, I knew it would be perfect for his  birthday cake.  In addition to Portal, my son also enjoys playing Minecraft, Pokemon and Skyrim.   I thought it would be fun to make a special treat from each one of those games, Skyrim Sweet Rolls,  Pokeball RIce Krispie Treats, and Minecraft Marshmallows.   Over the next few days I will be sharing the treats that I made. Today we are starting with the cake. 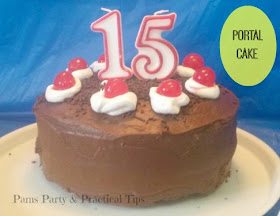 If you look online, you can find the recipe for the authentic Portal cake.   In that recipe it has coconut pecan frosting.  Kyle is not a fan of coconut or pecans.  He just likes plain old chocolate cake. Instead of spending several hours baking the cake from scratch, I knew he would be happier with a plain box cake.

The real Portal cake is very tall. I had considered on using two boxes of cake, but decided to go with just one.  Since it was only going to be our family eating this cake, I did not want to make a lot of extra cake we did not need.  I mixed up the batter, and then  baked it in two 8 inch pans.  Once they had cooled, I spread a layer of chocolate frosting on the top of the  bottom layer.  You could easily put another type of filling in between if you prefer.  I added the second layer and then frosted the entire cake.   I have seen versions with chocolate chips, or shaved chocolate covering the cake.  Since this cake was already very rich, I just sprinkled on some chocolate sprinkles to give the affect that it was covered in shavings.   It was then time to add the garnish.  I put two large spoonfuls of white frosting in a sealed  baggie, and snipped off one corner. I then placed eight dollops of the frosting around the cake.  An easy way to get them even is to imagine the cake is a clock.  Place the first one at 12, and then the second at 6.  The third dollop will go  at either 3 or 9 (whichever your prefer) and then the fourth on the opposite side.  Once you have the first four dollops, space the second four evenly between the ones you just placed on the cake.   Dry  the excess juice off of eight maraschino cherries, and then place them in the dollops of white frosting.

The official Portal cake has one large white candle in the middle.   Since this cake was a birthday cake, I decided to go with the number candles instead.   Kyle was thrilled with the cake.  I know he likes it, because he has already had three large pieces and it has only been 24 hours since he blew out the candles.