Our Visit to LEGO KidsFest

Disclosure:  I was given tickets for my family to attend this event.  All opinions are 100% mine. 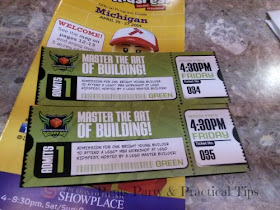 Last night my kids and I went to the opening night of LEGO KidsFest Michigan.  Each day of the event there are one or two sessions that are 4 1/2 hours each.  Our session started at 4 p.m. so we headed  to the event right after school.  Our first stop once inside the convention center was to go to  the concessions area.  My daughter did not eat a snack once she got home from school, so she was already hungry.  Having a snack first thing was good because there was no line, and we would not have to eat during  the very busy dinner time.  Right next to the eating area was the Master Builders Academy.   To enter this area you were given a ticket with an assigned time.  One hundred and thirty kids per class have a chance to attend a 40 minute workshop, and learn from an actual LEGO Master Builder. 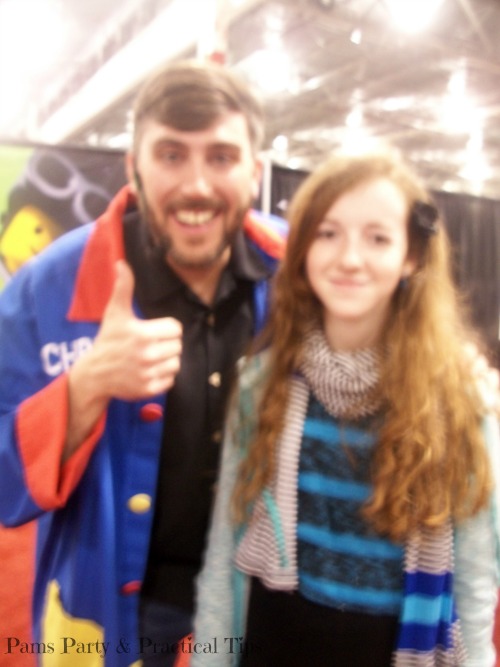 The master builder at our session was named Chris. We learned quite a few interesting facts. There are only 7 Master Builders based out of their headquarters in Connecticut.  He says he has the best job, because he gets to play all day with LEGO bricks. He also gets to travel the world to attend special events like this one.  He even got to help build the special city set in the LEGO movie.  How cool is that!  My daughter asked him how they moved all of the giant models from place to place without breaking them.  He told her that was an excellent question. Each model has their own specially designed crate to hold the the pieces in place while they are being moved.   There were some very big models and murals, so some of the crates must be enormous. 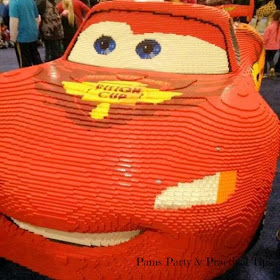 Our next stop was the Model Museum where we could get up close and take photos with life size LEGO models.  One of the coolest was the Lightning McQueen race car from the Cars movie.   It was made from 325,000 bricks, and literally weighs a ton! 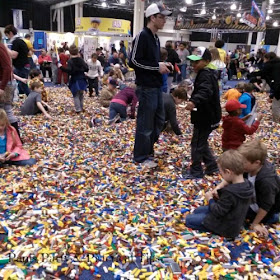 In the center of the convention center was the Big Brick Pile. Many kids were having a blast playing in more LEGO bricks than they have even seen.   My son and I had a disagreement on how many bricks there were, so we asked one of the staff.  She very sweetly said who ever is closest to a MILLION would be right.. Could you imagine being the person who has to pick up a million LEGO bricks?  (and BTW, I was the one who was right) 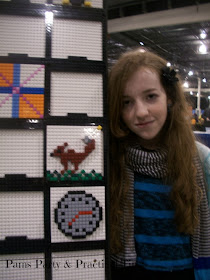 One of my daughter's favorite areas was the LEGO Art Gallery.  In this area you could create your own masterpiece using single size bricks  to hang  on the gallery wall.  Can you guess which one my daughter made?  There is probably no surprise there, it is one of her favorite animals. 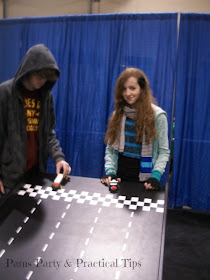 Another area that my kids really enjoyed were the Race Ramps. In this area kids built their own cars, and race them against other cars. The race between my kids was probably not a fair one. With my son's building, robotics, and Pinewood Derby skills, his car smoked hers. She did not seem to mind though. 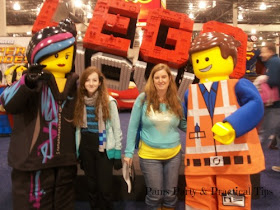 Toward the end of the session we were taking more pictures of the models, since the area was a lot less crowded than it was earlier in the evening.  We were thrilled to get the chance to pose with the characters of  Emmett and WyldStyle.  We really loved the LEGO movie, and have already seen it twice. We also plan on buying it when it comes out on DVD.

There were several areas designed just for little girls.  A life size Cinderella overlooks a giant LEGO storybook, where girls can create their own fairytale.  There is  also a LEGO Friends area where you could add creations to a Heartlake City scene.  Over in the Construction Duplo area there are two giant brick piles for the younger set.  A pink, purple and blue  pile, and a pile of  traditional colored bricks.  In the Duplo area, kids could also pose in Cinderella's Pumpkin Carriage, and on a Jake and Neverland Pirates ship.

Here in these pictures are some more of the fun activities that we saw.  In the Battle Brick Zone you can enter fun competitions and challenges such as relay races, and tower building.  While we were there we saw several pizza making relays with a Teenage Mutant Ninja Turtle theme.  In the Challenge Zone, families compete against each other to see who could build the fastest.  At the end of the competition everyone won a prize.    Creation Nation was another fun area we visited.  You are encouraged to build your own creation which  is then placed on a basketball court sized map of the U.S.  I tried to take a picture of it, but the map was so big, the picture does not do it justice.

In the Star Wars Thwart the Dark Side, Yoda overlooks the zone. He wants you to build up the Republics defenses against the Dark Side's attempts for domination.  If you are a Chima fan, there is a large area where you can grab some Speedorz to gather the life force of CHI.(I have to be honest, I have no idea what that means.. :))  If you chose to eat dinner at KidsFest or just want to sit and rest for a bit, there is a LEGO movie theater where you can watch your favorite LEGO characters. 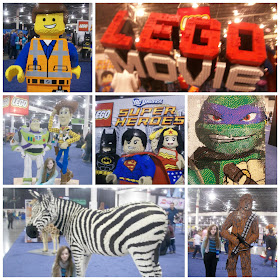 There were just so many things to see and do at LEGO KidsFest.  I took over 100 pictures! Here are some more of my favorites.

While LEGO KidsFest is sold out for the Michigan sessions, you are in luck if you live in Calgary Alberta Canada, Atlanta Georgia, Dallas Texas, Richmond Virginia, or Indianapolis, Indiana. There will be upcoming stops in your area this year.  You can learn more about LEGO KidsFest on their website.  If you get the chance to go, I highly recommend it.