When having a party, one of the biggest things to plan is the party food.   One thing that make the LEGO movie unique is that they travel from land to land while trying to escape Lord Business's army.   Having many lands in the movie, really expands the possible food choices. 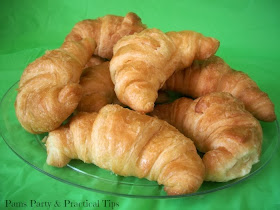 The movie starts out in Bricksburg, which is the city where almost  all of  the minifigures live. Emmet works and lives in a Bricksburg apartment building. Several times during the movie, you will see a minifigure with a crescent roll.  These can easily be made from a tube, or bought pre-made. I have found a dozen of medium size rolls at Aldi for only $2.49.  Another food item that is featured prominently in Bricksburg is the taco.  President Business promises the townspeople free tacos on Taco Tuesday.    Other food seen in Bricksburg; ice cream, expensive coffee, sausages (a favorite of one of the characters) and chicken legs. 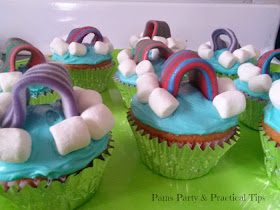 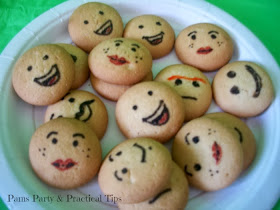 For part of the movie, our LEGO movie heroes are underwater, which also makes for party food ideas. You could serve blue jello to represent the water,  goldfish crackers for the fish in the sea, and even mini sub sandwiches.

Some of the other lands they briefly visit, are The Old West and Middle Zeeland.  Some foods from The Old West could be something like nachos, or root beer.. I really do not know enough about Middle Zeeland to think of any food items..  You don't see much if it as the heroes fly through it on their way to meet the Master Builders. 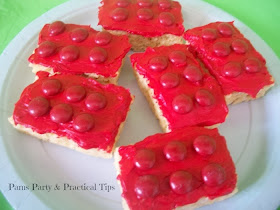 Of course you could serve food that looks like regular LEGOs . Almost anything square or rectangular can be turned into a LEGO brick.  In the picture Rice Krispie Treats with a little bit of red frosting and red candy are turned into LEGO bricks.  You could cut a cheese pizza into rectangles, and then add some mini pepperoni.   You could use some of the candy molds I shared on my LEGO Party Idea post and make your own LEGO candy.   If you prefer pops, dip some marshmallows in yellow candy melts and draw on the faces with a food marker.    I made the easy  minifigure cookies based on characters in the movie, (pictured above) with just Nilla Wafers and food markers. 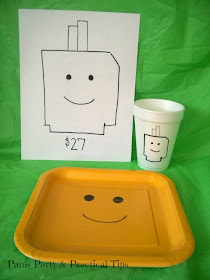 The basic colors of green, yellow, blue and red are the perfect colors to use for a LEGO party. The minifigures who live in Bricksburg are brainwashed to think they love expensive Starbucks like coffee. Emmet is actually happy that his coffee costs $27 a cup.   I know the cup is looking a bit square, but that is how it looks in LEGO land. There are posters and ads everywhere you look in Bricksburg.  I could be fun to make up a few to hang around the food area, and other parts of the party.   I found these awesome square yellow plates at Meijer for only  $1.50.  Using a non toxic of food marker, it would be fun to dry on different LEGO faces.

I hope this post helps give some inspiration for your LEGO movie party.

I will be linking this post up on the following linky parties.