I finally feel that my Woodland Tree is finished.  I was also going to show you one more ornament, but with sick kids and crazy scheduledes, they just did not get made.  They are now on the list for next year.  This tree is a small       tree, that I got at Target a few years ago for under $20. If it looks like there is a piece missing on the bottom right, there is. I think that piece broke off during a cat climbing incident in 2010. (basically one of our bigger, heavier cats sat on a branch that was not made to hold a 15 pound cat) This tree sits in the our bedroom, where I can enjoy it every night before going to sleep. 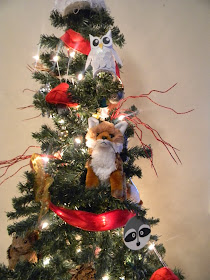 My favorite part of the tree has to be the fox toy I "borrowed" from my daughter.  She has stuffed animals all over the house.  When picking them up one day I thought that the fox would be perfect for the centerpiece of the tree. 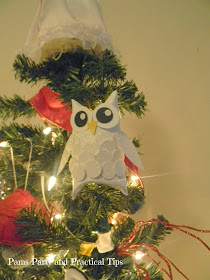 One of the snow owls got a prominent place near the top of the tree. I am so excited with the response they have received.  They were just featured on the Hometalk facebook page the other day.  If you would like to see I made my snow owl ornaments, you can see it here.

I just finished these fun ornaments this week.  I based them on ornaments that I saw at Target.  I will be sharing a tutorial soon. 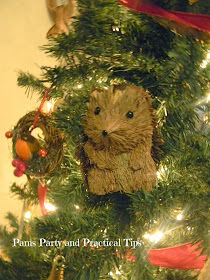 Another favorite is this Hedgehog figure that I found out Target very early in the season.   We have been findind collecting hedgehog items, because of our real hedgie Silver. 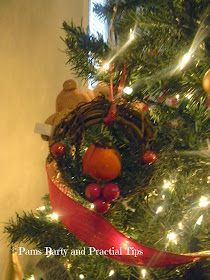 The Mini Wreath Birds made it on the tree too. You can see I made those here.

Some of the other ornaments on the tree, I bought last year at Target after Christmas. I found red foxes, brown bears and two types of toadstools.  They were all 70 to 90% off.  Considering they were not that expensive to begin with, I got quite a deal. 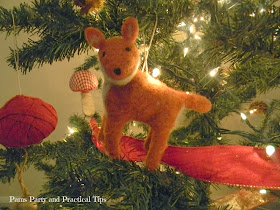 This year everyone seems to want woodland animals. The ornaments at Target are already very picked over at my store.  In fact the entire woodland display has been taken down and the little that  was left has been placed on another shelf. While at the store yesterday, this was the only fox I found left, so I bought him. I think he is pretty cute. 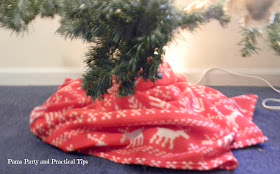 The finishing touch was this woodland themed blanket that I bought at Kohls for only $3.99 during their Black Friday sale.  I probably should straighten it out a bit. I was trying to quickly take the picture because there was a furry girl wanting to go sit under the tree. What is it with cats and Christmas trees anyway?

Do you have a themed Christmas tree? I would love to hear about it.