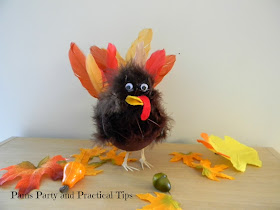 I am pretty excited about this craft.  Kara came up with the idea to make a turkey a few weeks ago. She sketched it out, picked out the supplies and made her idea come to life. She also took all of the pictures herself. (one of the reasons why she is not in any  them this time)   I am one proud mama! 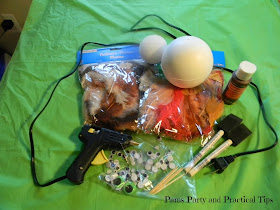 Here are the supplies she used.  Two styrofoam balls of different sizes, brown paint, brown and colorful feathers, google eyes, and a glue gun. (not pictured small pieces of yellow and red felt) 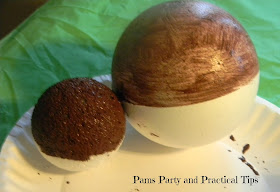 The first step was to paint the styrofoam balls brown.  We found a new kind of styrofoam at the craft store on this visit. It was solid, and did not have the holes of the traditional styrofoam.  It did cost a few cents more, but it absorbed a lot less paint, so she did not have to do as many coats. 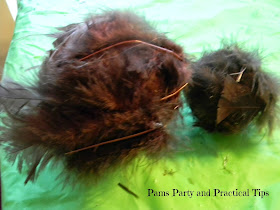 She then covered the smaller ball entirely in feathers.  On the bigger ball she only covered the top half.  This ball will be the body.  She used bigger features for the wings. 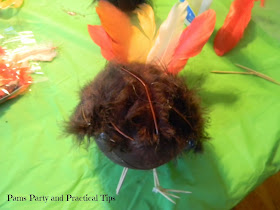 In this picture you can see the bottom half of the ball, some of the tail feathers, and a picture of how she formed the feet out of toothpicks. 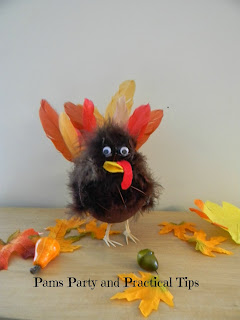 Once the feet were formed. she joined the two balls together with a toothpick.  The eyes, beak, and snood were added on with hot glue.  I think he kind of has a worried look on his face, like he knows what we eat on Thanksgiving. :) This little guy does not need to be scared though, we don't eat styrofoam and feathers.

We what to wish you a  very Happy Thanksgiving!!

I will be linking up this craft on the following linky parties here.    If you would like to keep up with craft posts like this one, be sure to sign up to follow by email!