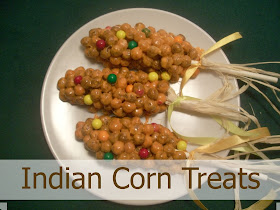 Now that Halloween is over, it is going to be full speed ahead to Thanksgiving and Christmas. I went to Kohl's today, and the entire store was decorated for Christmas! I am so not ready for that.  Instead I would like to concentrate on Thanksgiving first.  A few months ago  I bought a book of treats from Kohls, and in it I found this recipe for Indian Corn Treats.  I knew I wanted to give them a try. 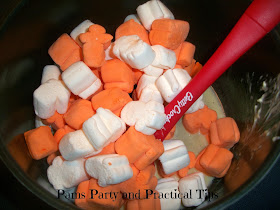 They are not that hard to make, and you can even improvise with the ingredients like I had to do tonight.   The recipe calls for 1/4 cup butter or margarine, a 10.5 bag of mini marshmallows, 10 cups of Peanut Butter and Chocolate Cereal, and  1 cup of chocolate candies.   When I went to make the Indian Corn, I found that I was all out of mini marshmallows.  I  did have a package of ghost and pumpkin marshmallows from Aldi, and because it was getting late I went with it. . While the orange color overtook the white marshmallows, the end product  still looks like Indian corn.  If you do use white mini marshmallows, you can add a little bit of yellow food coloring to get the color Indian Corn you desire.

First melt the 1/4 cup of butter on low heat in a large pot. Once the butter  is melted, add  the marshmallows. After I added mine, I realized I should have cut them down into smaller pieces so they would melt faster.  Instead I had to take a knife and try and cut them while they were melting. 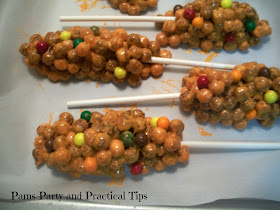 Once the marshmallows are melted, added the cereal. I got a box that ended up being more chocolate than peanut butter, so my corn is on the brown side  My chocolate candies are Sixlets that I found at the dollar store.  Add some off the candy to the cereal mixture, but keep at least half of it for a  later step.   You will want to grease your hands when forming the corn,  because the mixture is sticky!  Scoop out portions of the cereal mixture and shape it into a pieces of corn on a piece of wax or parchment paper.  The recipe claims it should make 10 servings, but I found it actually made 13 large treats.  If you don't need that many treats, you might want to cut down the recipe.  Insert a lollipop stick into the middle of the corn and reshape if needed. Add some of the colored candy to the top of  treats, and allow them to set. 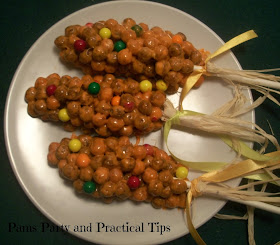 Tie colorful ribbon or raffia to the lollipop sticks and ENJOY! 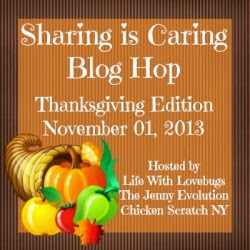 This post is part of the Sharing is Caring Thanksgiving Blog Hop hosted by Life With Lovebugs, The Jenny Evolution and, Chicken Scratch NY!
All of the blogs listed below are sharing Thanksgiving or Fall themed posts as part of this event, so click on one or all of the links below to find some great recipes, tutorials, crafts and more!