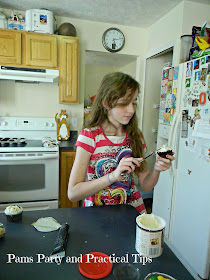 It's been a little while since we have had a Crafting with Kara.  She has many ideas she plans on doing, but with all her activities and school, she has not had the chance. I guess she takes after her mother on that one.  This week I made some cupcakes, but then did not have a lot of time to decorate them.  I asked Kara if she would like to decorate them for Halloween.  She said she would love to.  Here are her designs.. 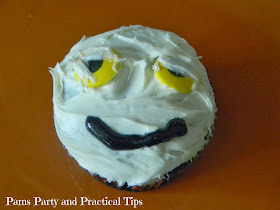 At first she wanted to make a chocolate werewolf, but when she checked out baking supplies she found that we were all out of chocolate frosting.  We did, however, have a couple containers of white vanilla,. I recently bought some big yellow and green eyes on sale.  She felt that would be perfect for a mummy cupcake. She used black  Wilton Sparkle Gel for the smile, and added some extra frosting on the eyes to look like they were partially covered. 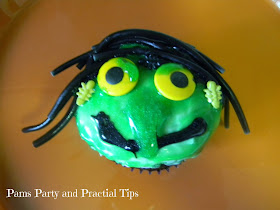 She found some green Wilton Sparkle Gel in our supplies, and thought it would be perfect for a witch.  She used the same yellow eyes that she had used on the mummy. She added some extra green gel  for the nose, after adding a smile with black gel.  She uses black licorice for the hair, and added some Wilton bug sprinkles. 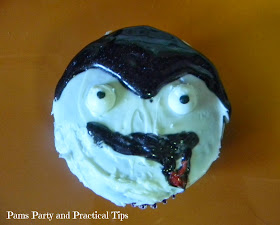 For the Vampire she chose white candy eyes that we found at Aldi recently.  She used a lot of the black gel for his hair and smile.  She drew on his tooth with the gel, and then added a small amount red icing to the tooth so it would look like blood. 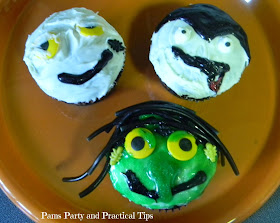 I will be linking up Kara's cupcakes on the following fabulous linky parties, that you can see here.