Cloudy with Chance of Meatballs 2 - Party Food and Decor 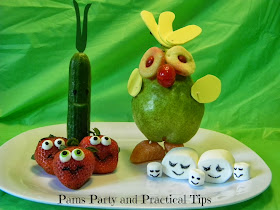 If you have had a chance to see Cloudy with a Chance of Meatballs 2, you know that many of the stars in this movie are Foodimals.  A Foodimal is half animal, half food. Because of the cuteness factor of the Foodimals, some kids might have an issue with eating them.   One thing great about doing a Cloudy with a Chance of Meatballs party, you can pretty much choose any type of food, and it is most likely in the movie. 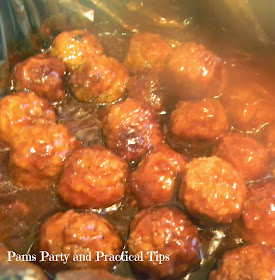 Since there is a chance of meatballs in the title of  both movies, it would be a fun idea to serve meatballs at your party.  I like to make a batch of party meatballs in a slow cooker.  I pour in a bag of frozen meatballs, about a half bottle of BBQ sauce, some ketchup, and a couple spoonfuls of grape jelly.  It  may not sound like it a good mixture, but when it is all mixed together, the meatballs are saucy and sweet at the same time.  They will  also often disappear fast. 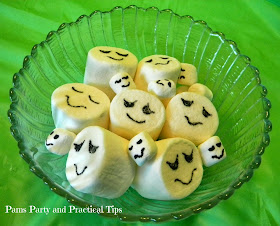 Some other foods that are in the movie that are great party foods are: 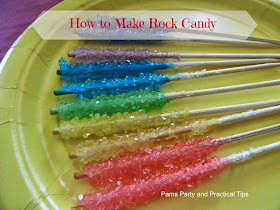 There are several scenes in the film that take place on Rock Candy Mountain.  Rock Candy can be a lot of fun to make.  We made some for my daughters birthday party this past summer. If you think you might like to try to make your own, you can see how we did it here. 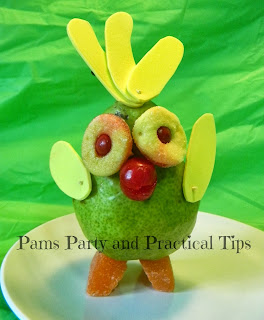 In the movie, the Fruit Cockatiel is quite pretty, and in a lot of scenes.  The  animation version  has pineapple rings with maraschino cherry centers for eyes. It's top feathers are banana peels, and it's wings the actual banana. It's feet are made from orange slices, and the beak is a grape, that  at times looks like a cherry.  I altered my version a bit, because the banana and peel would turn brown quickly, and the pineapple rings would break easily and be messy.   I used candy peach rings with the yellow side facing up. The Maraschinos were too big to fit in the middle, so I used red Skittles.  The feet are candy orange slices.  Not only do they make less mess, they are substantial enough to allow the bird to stand.  The beak is a cherry, since I did not have a grape.  I used yellow craft foam for the wings and top feathers.  It still mimics the look of a banana and its peel,  but it will not turn brown.   I used parts of toothpicks to attach all of the pieces to a green pear. 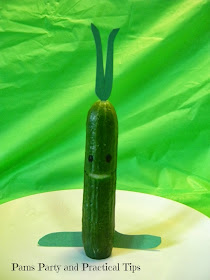 Instead of using a pickle to make a pickle person, I found a pack of baby cucumbers on sale at Meijer for only $1.25. They were the perfect size,  and not as messy. I trimmed one end, so the cucumber would stand.  I drew on the eyes with an edible marker,  and made the feet and leaves  out of paper.  I attached the the paper to the cucumber   with pieces of toothpicks. 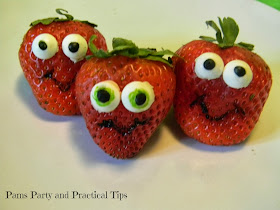 Berry the strawberry, has to be one of the cutest parts of the movie.  He is not quite as cute when he is  the real thing, but will still   be a kid favorite.  He has really big green eyes in the film.  Since I did not have candy eyes that were green, I added some green with an edible marker.  I also drew on the mouth with a black edible marker.  While it worked pretty well, soft strawberries do not make the best writing surface. 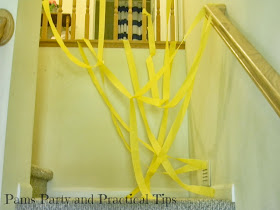 There are several different ways you could decorate for a Cloudy party.   You could make falling food like we did for our party a few years ago, which you can see here.   In the second movie they spend a lot of time in the wild.  There are several scenes where they find a cheese web left by a Cheese Spider.  Using yellow crepe paper you could make webs around the party area.  I made this one in the front hallway.   It might be cute to add a cheese spider or two to the web as well.

Since Flint is an inventor and spends a lot of time in a lab, you could use things like beakers, and bottles to give a laboratory look.

There are several signs left from the town from before it was destroyed by the giant food.  You could make a few to feel like you are in the town of Swallow Falls.  Some signs you will see in this movie are

You could also make a FLDSMDFR aka Flint Lockwood's Diatonic Super Mutating Dynamic Food Replica.   It looks like a small white computer with legs.  You can find several pictures online by doing a search.

Did you have a chance to see the Games and Activities post? Or the Party in a Box?
I hope I have given you the inspiration to have your own Cloudy with a Meatballs 2 Party. 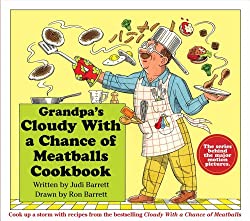 I just recently found out there is a cookbook based on the book.  In this book are a lot of recipes that would be a fun edition to your Cloudy themed party.
You can find the book on Amazon here.