It's Friday night, which means it is time to Dare to Share!
What fun things did you do this week?

Wow, was this a busy week for us. On Monday I took my daughter to Girl Scout Camp, and stayed for the day to chaperone.

On Tuesday I took my son to  the high school so he could meet with his middle school parapro, and a friend to have another tour of the high school before school starts.  Later in the day we tried a burger place that we had not been to before, and went grocery shopping. (Remember the last time Kyle went grocery shopping in my Food Police post?) Well he doesn't care about labels quite a much, but his 3 things he feels about shopping are still totally true. I don't know how many times he said.. I'm bored!

Wednesday was a BIG day here.  I had to go back to camp to pick up Kara so I could take her to the Orthodontist. The poor girl had to get braces AND an expander.  She was in a lot of pain on Wednesday night, but still went hamster shopping with one of her BFFs to help her pick one out.

Thursday morning it was orientation at the middle school. Kara was still feeling pretty miserable.  At that point she still had not been successful eating more than a couple of bites.  That afternoon I took Kyle shopping again. (I am a gluten for punishment) We went to Target to get him his first cell phone. It took longer than it should because he kept saying he was bored, and that he didn't care. Well that might have been true in that moment, but if he didn't like his phone I am sure he would very much care.  We left the store without a phone.

Today I took my oldest daughter to the mall to find a few things for school.  She has been losing weight, and her current clothes don't really fit that well. (yea!)  We hit the jackpot at Charlotte Russe.  There were found two pairs of boots that were on clearance. Both had been $30 regular price.  We got one pair for only $9.99, and the other for $6.99.  Two pairs of boots for only $17 Aweseome!  We also found some good deals at Forever 21.  I was totally reliving my teen years, with all the 80s clothes.  I was exactly my daughters age the last time these styles were in fashion.. She picked out a couple of shirts, a pair of boots (one of the other pairs is for Kara) and a bomber jacket.  Her jacket is very 1983!  It looks very much like the one that Michael Jackson wore in the Thriller video, but burgundy.  We also stopped by Radio Shack, and bought Kyle a phone. (without him!)  I think he will like what he is getting, even though he was not part of picking it out.

With all that going on, I did manage to get a few things done on the blog. 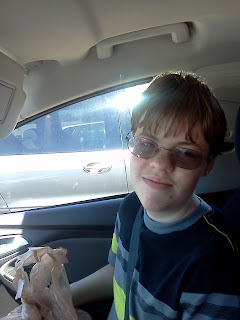 Last weekend, I shared a post about Our Year of Transition.  Both Kyle and Kara are changing schools this fall, and both of them are feeling anxious about it. At least it is only 2 of the kids this time.. Two years ago it was all 3! 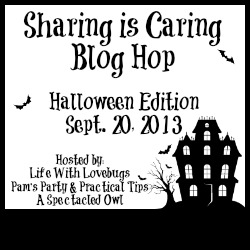 On Sunday I shared how I was co hosting the Halloween Edition of the Sharing is Caring Blog Hop. I have done several, and they are always a good time.  We are currently open for sign ups, if anyone would like to join us.  You can find the sign up post here.

Yesterday I asked a few questions that I am hoping that everyone will help me with.. I am changing a few things in September, and I think everyone will like what I am doing.  I am  planning to share a different party theme of the week, and I would love to know what kinds of themes people would like to see.  I am also considering writing an Ebook. I would like to know what kind of Ebook would be the most beneficial.  I would love it if you could leave on a comment on my question post or let me know in the comments here.

Did you have a chance to see the fabulous Features of the Day? This week they were all useful practical tips that everyone could use.
Homemade Baking Mix by Yesterfood
Saran Wrap Nail Art by Spud Nails
Video Case Storage by Wesens-Art

Now it is time for this week's party!  You can pretty much link up anything that you would like to share.  I don't require that you are a follower to link up, but I would sure love it if you would.  If you would like to share the word of this party on your own pages,  that would be great too.  You can find my party button, on the button page.  If you are chosen as a Dare to Share Feature of the Day, your post will be featured on the blog, BlogLovin, Facebook, Twitter, Pinterest, and G+

Now Link Up and HAVE FUN!!