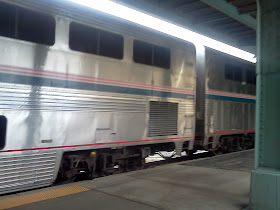 Funny how a night with very little sleep can throw you off for a couple of days.  It happened when we picked up mom at the train station, and her 11 p.m. pick up time ended up being an all night ordeal.  It also happened when we dropped her off to get back on the train, but at least the hour of the day was a bit better. 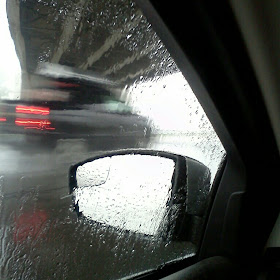 After what happened last week,  Kyle and Kara decided that they would not ride along for the return trip.  My mom totally understood.  Since the train had a 6:15 a.m. departure time (we do not have any other time choices) mom, my oldest daughter and I made the hour drive the night before.  On the way we were stuck in the middle of a torrential storm. It was raining so hard that I could not see the road at all, so I pulled to the side of road under a underpass with another car.   It amazes me with how many people think they can still drive regular speed without being able to see the road. 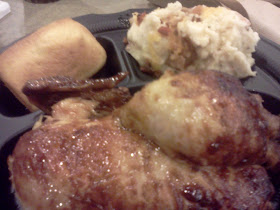 When mom was getting us a room at a hotel not too far from the train station, a small group of bikers pulled into the parking lot. Their bikes were extremely loud, they were blasting music, and they were shouting as loud as they could.  (possibly because they could no longer hear with all  the noise that their bikes made) While they were checking in, we decided to go to dinner.  We saw a Boston Market nearby.  I had never eaten at one, because we do not have one near where I live.  It was good, and portions were HUGE.   With our bellies full, we went back to the hotel.

I logged on and tried to do some blog work online.  I had not had a chance to schedule Dare to Share, and I had to check my messages and Facebook account.  It took me quite awhile because I would lose the free hotel Wi-Fi every few minutes. I was finally finished and able to lay down at about 12:30 a.m.  With a 5 a.m. wake up time, I knew I was not going to get much sleep. Little did I know how little.   At 1 a.m. the entire hotel heard the loud roar of motorcycles, and booming music that was blasting in the parking lot.  Luckily their rooms were on another side of the hotel, so it was quiet again after a few minutes.  I was just about asleep again, when my two roommates (who will remain nameless :)) both started snoring. Being in such close proximity it  was loud enough that I was unable to fall asleep.  At one point I grabbed an extra pillow and covered up my head.

Since I was still awake at 1:30 a.m. I very happily watched the Jesse and the Rippers reunion on the Jimmy Fallon show.  Man, does Uncle Jesse still look fine!!  (Even in a fake mullet) Hard to believe that he is 50!  I started to drift off to sleep, but not for long. Around 3:00 a.m. the thunderstorms started. The area where we were staying was hit with a series of severe thunderstorms that lasted for a few hours. I started to drift off to sleep for a few minutes.  Mom was worried that we were not going to receive our 5:00 a.m. time wake up call. (we didn't) She was up and starting to get ready by 4:45 a.m.  We needed to leave by around 5:30 a.m. to check in for her 6:15 train. I stayed in bed as long as possible, but it didn't help.  I finally got up at 5:20 a.m.  As soon as I was dressed, she told me that I could go back to bed.  She just got a text alert, telling her that they train was delayed until 7:39 a.m..  I laid back down and got maybe 20 more minutes of sleep.  We were now planning on leaving the hotel around 6:45. Mom did not get a second text, but something told her to call the hotline to check if there were more delays. There were! The hotline was now saying around 9 a.m. I tried to lay down again, but couldn't sleep. I started watching the Today Show.  On the next call,  the time had been pushed back to 9:39 a.m.  Since that time was only a few minutes later, we decided to go grab some breakfast, and head to the station.  We got to the station around 8:30.  At that time they still had the 9:39 time.  We met a woman who had been waiting for a couple of hours. She was not happy that they only sent out one text. Since she did not get a second text, she thought that it was only delayed a little bit, and came to the station.  We were waiting for about 30 minutes when there was an announcement.  The train that my mom was waiting for was now going to be delayed another hour, BUT their was good news!  Another train that was going to be there momentarily, and scheduled to leave at 9:15 for the same destination, had room for everyone. The conductor knew that many of the passengers would miss their connections if they were made to wait. We said our goodbyes and mom  boarded the train.  I decided to wait for the train to leave just in case there were anymore problems. They are usually only in the station about 20 minutes or so. This time is sat for over 45 minutes.   Right before it left, there was another announcement on the loud speaker. The train that my mom was originally going to take was now delayed until 11:30 a.m. Over 5 hours later than it's departure time. The delay was because there was flash flooding in some areas of the route, and it could not cross those areas until it got clearance.  The train she had been waiting on,  finally pulled out of the station at 10 a.m. 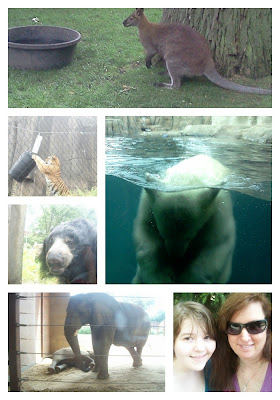 Since we have a zoo membership, and the zoo was only a couple of minutes away from the train station, we decided to go for a few hours even though we were tired.  It was a good day for the zoo, because the animals put on quite a show for us.   The polar bear cubs were doing somersaults in the water in front of us. We were able to  see the  wallabies up close and running free in a new exhibit. The tiger who had been relaxing in the pool, decided to get out and play while we were watching him. The sloth bear spent hours in front of the window eating bugs and looking right back at the humans. 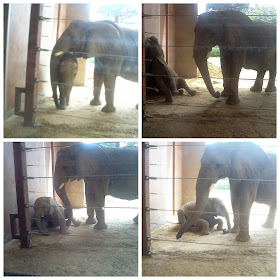 The baby elephant was so adorable. After a cuddle with mom, he started rubbing it's face on the ground like he was really tired. Then he started rolling all over covering himself in dirt. After a few minutes he ran outside to start happily playing in a mud hole. I wish I could have taken a picture of  him doing that, because he looked like he was having so much fun, but it a weird angle and too far away.

After a much needed nap, and some made up hours of sleep, things are finally getting back to normal.  Well at least for a few days.