Our Party Food Recipes and More

Disclosure: I was give free samples and other goodies by Kleenex Hand Towels to do this review. All opinions are 100% mine.


Since we had a slumber party, the girls were over at our house for dinner.  Instead of just going for something like pizza, we thought it would be nice to go outside and grill hamburgers and hot dogs on a beautiful summer day.  Unfortunately the grilling plan did not work out.  Our grill would not start when Kara's dad tried to light it.  (it's an older gas grill, that might have seen its last days)  The girls did not really seem to notice that we had to make the food inside instead of on the grill. In addition to the meat, we also had a few other picnic type of dishes on the menu.

Pizza Pasta Salad has been a family favorite in our house  for many years.  I originally found the recipe in a Taste of Home Magazine in 1993. Wow!  Even I am surprised by that.  I was curious to when I found it, so I pulled out my well worn magazine out of my recipes.  It has been my go to recipe for potlucks, picnics and parties.

This pasta salad is pretty fast and easy to make.  Start by preparing a box of your favorite pasta.  We like to use Rotini in ours.  In a large bowl add the drained pasta, and 3 ounces of pepperoni.   (pictured)  Since I was running out of time, I did not take pictures of each step.  Also add in 2-3 diced tomatoes, and 16 ounces of cheddar cheese.  This recipe does not have to be exact.  I used handfuls of cherry tomatoes, and a mix between cheddar and Velvetta cheese instead.  You can also add sliced green onion to the salad. I did not because there were more people who did not like onion, than those who did.

Pour the dressing over the other ingredients and stir. Cover the pasta salad and place in the refrigerator for at least a couple of hours to chill.


Enjoy! This salad will disappear quickly!

Another thing we served at the party was a fruit/salsa mix. I got this recipe from a friend of mine. Pour a jar of salsa into a bowl. 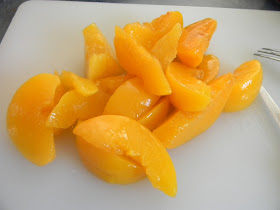 Drain a can of peaches, and cut into small pieces.  Add to the salsa.  It is a yummy mix of spicy and fruity, and tastes delicious with Fiesta Lime Tortilla Chips from Meijer.  I somehow did not get a final picture of the salsa.

Kara had also asked if we could have rainbow fruit as one of the dishes.  She chose the her favorite fruits according to the color. We had red strawberries, orange cantaloupe, yellow bananas, green grapes and green kiwi, blue blueberries, and purple grapes.  The dip is dreamy orange fruit dip that I found on Madigan Made. This stuff was so good, you will have to try it.

Do you remember when I shared about why Kleenex Hand Towels are great for company earlier in the month.   We had 4 adults, 3 teenagers and 4 tweens in the house during dinner.  Luckily I had  put out a brand new box, because we had 11 people using the same bathroom and washing their hands.  Cloth towels would have become wet and dirty real fast. It was great not having to worry about damp towels in the bathroom during the party. The next day my youngest daughter asked if we had any more of the Kleenex hand towels because she likes them  even better than cloth towels.  Maybe now wet towels won't mysteriously end up on the counter on a daily basis.   You can read more about Kleenex Hand Towels at Kleenex.com.
Pams Party at 3:40 PM
Share