Reindeer Card and other things 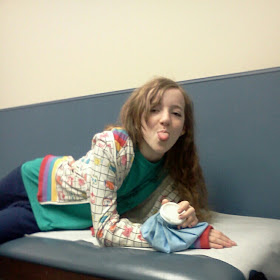 I had planned on working on another project today.  As you all know.. the best laid plans don't always happen.   I was surprised by a phone call from Kara at her school at little after 9 this morning. She told me she had been injured in gym class.  She said the injury was bad enough that her gym teacher thought she might have to go home. They were playing a game where you tag someone and then join the line  If the line breaks, the tag does not count. .  She was between an athletic girl who is really into sports and a boy much bigger than she is.  Both of them had a tight hold of one of her hands and went running in opposite directions.   She said the boy had an extremely tight grip on her hand when he pulled on her arm.   She was in a lot of pain from this incident.  I called the Drs office and made an appointment just to be on the safe side. The Dr said that it was most likely just a sprain, but she was concerned about the amount of  pain in her hand. She told us she was sending Kara to have an X-ray to make sure that some of the smaller bones in her hand were not fractured.  We should hear the results  soon.  As of now she needs to keep it wrapped and she is excused from gym next week. Since she is having some trouble moving her fingers, writing might also be a challenge for awhile. 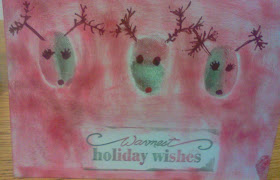 Since the unexpected medical visits took up several hours today, I am going to share a project Kara made at Girl Scouts earlier this week.  I adore this Reindeer holiday card  that she made using her thumbprints. She added eyes, a nose and antlers to each of the thumbprints. This is a simple and sweet way for your child to make cards for their loved ones.  I did not get to keep this card, it went to a local nursing home, but I am hopeful she will make me one too.
Pams Party at 3:12 PM
Share