I hope everyone had a Merry Christmas.  The last few weeks were a blur for me. Now that things are settling down, and we have another week of Christmas break I have a bit more time on my hands. 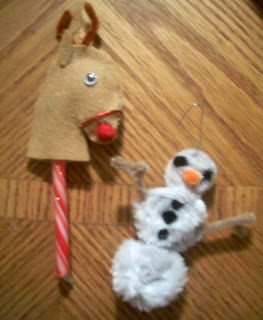 One of the things that kept me busy last week was the last minute crafting I had to do.  Kara remembered after she was in bed that she needed to bring in a small gift for her class gift exchange. They were allowed to bring in homemade items.  She said she had to bring in it in by the next day so I allowed her to get up, and help with the crafting.  You can see how we made these quick  homemade ornaments HERE. 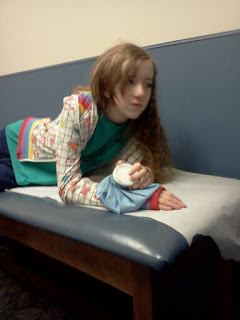 We also had yet another injury. During gym, Kara's class was playing a game where you tag someone so they will join your group. When you get four to your group, the group breaks into two teams of two.  Well during the time when there were three people, Kara was holding hands with two kids who were much bigger than her on each side. At one point they went into opposite directions at the same time.  Ouch!  The boy on the right side was squeezing her hand tightly near her knuckles.  When they went into opposite directions the girl on the left side was pulling hard enough to cause resistance.  The boy pulled much  harder and sprained Kara's  wrist.  The Dr felt she could also have some broken bones in her hand, so it was off to have her 4th X-ray of the year. We found out the following Monday, that there were no fractures.  She had to have her hand in a brace/wrap for an entire week while it healed.  She finally felt better just a few days before Christmas.

Other things we did right before Christmas..  Made lots of pretzel hugs for a Christmas party and for relatives.  We decorated sugar cookies for Santa.  I love how my snowman cookie turned out. We also finished our gingerbread house on Christmas Eve. I admit it, I so used a glue gun to put the house together. 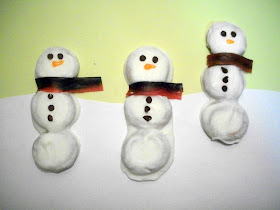 The day after Christmas we got several inches of snow, which inspired me to make some Snowman Pretzel Treats.  You can see how I made them HERE

Now on to other news..   As part of my New Years Resolutions, I want to upgrade my blog.  One of the things I have done to reach my goal is to become a .com.  This week instead of having blogspot in my name, my new domain name is PamsPartyandPracticalTips.com     I also looked back at the year that was.  I shared my top 10 posts of 2012.  Some of them surprised me, some did not.   You can read about all about what made the top 10 HERE.

As we move into the new year, I want to continue to have a Feature of the Day. I will be featuring the great posts that link up to Dare to Share.  I share Feature of the Day posts on the blog,  Facebook, Pinterest, G+, and Twitter.  While I do not require you be a following to link up to Dare to Share, I would love if you would follow in some way to see when you are featured. There is no limit in the amount of posts you can link up.     I really look forward to seeing all the great post you Dare to Share.

Link up and HAVE FUN!