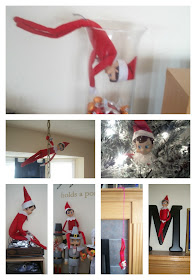 Buddy arrived at our house the evening of Thanksgiving.  Last year he was content with mostly sitting and observing in different areas of the house.  He has a hard job of watching over older kids, and last year Santa even had to restore his power because one of his charges  poked him.   While he has been away he has been working out. He has returned much braver and loving excitement.  You could even call him a daredevil! He is no longer a nervous and shy elf.

Here are some of the adventures that Buddy has had in the past week..

Hidden near the top of a Christmas tree

Hung out with a bunch of Pilgrims, sat on a Pilgrim hat

Bungee jumped off the fireplace mantle
and then  took a rest on the letter M after  his death defying bungee jump.

Currently he is swinging from a chandelier (aka kitchen light)

The kids are loving the new and adventurous Buddy.  He might need to pace himself though, it is not even December yet.

I would love to hear some of the fun things your Elf on the Shelf is doing..