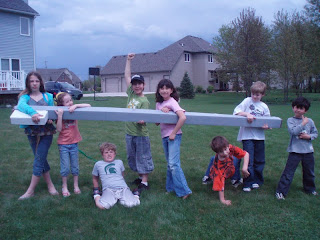 Kyle's birthday is just a few days away.  I am feeling a little  bittersweet about him growing up and turning all teenager on me.  I have been looking back on past birthdays, and want to repost this oldie but goodie.   I make all of my party props, many of them out of recycled cardboard.


Time for the flashback post... If only he was 5 and in love with dinosaurs again.  :)

When making my cardboard surfboards for our upcoming beach party,  I realized how many props I have actually made with recycled cardboard over the years.   A couple of years ago my son wanted a giant party.  I like to call it the Honey I Shrank the Kids Party, he likes to call it the Giant Stuff party.   LOL!  A friends husband owns a blinds business and had many long cardboard boxes.  We used this long skinny box and spray painted it gray.  I added a small white box with tape and it became a toothbrush.   The kids had so much fun with this prop.  It would be  very easy to replicate.

Not too long after we moved into our current house, I used large moving boxes to make dinosaur cutouts for my son's dinosaur party.  As  you can imagine, these were also a bit hit with the preschool set.  To make these dinosaurs, I found some pictures in childrens books to use as a  guide.  I then sketched, cut out and painted with acrylic paint.

For my daughters horse party, I used cardboard boxes to make a corral.  Originally it was going to be set up outside and go all around the horse, but it ended up being too windy that day.  You can see part of the corral in the background.


Last summer we had a Cloudy With a Chance of Meatballs Party, which gave me many oppurtunites to use recycled cardboard.   In the first picture I used cardboard tubes painted yellow for a bowl of  large macaroni pasta.  I used small piece of foam board, cardstock and fiberfill to make the oreo.   In the second picture, the girls carry a giant french fry made  from a long box painted yellow.    In the last picture, the falling pizza was made from cardboard food boxes, recycled kraft paper and cardstock scraps.


My most current recycled cardboard creation was made from a box used in the giant things party.  This at one time was a giant dragonfly.  I do not have a picture to post, but the wings were made out of white plastic and wire and the eyes from pieces of white cardstock.


I cut open two of the dragonfly boxes, and laid them flat.   I then cut out two large surfboards to use as picture props for our upcoming beach party.

With a little bit of creativity, almost any box or large piece of cardboard can be made into some sort of party prop.