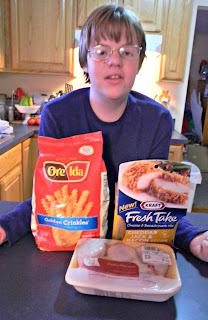 This week Kyle decided to make a quick and inexpensive meal for Cooking with Kyle.   This week at Meijer Kraft Fresh Take was on sale for $2.  I also had a $1 coupon for Fresh Take, which made it only $1.  A few weeks ago chicken drumstickes were on sale for $1.99 a pound,  and I picked up a 5 pack for only $2.11.    He chose the Ore Ida fries because they were in the freezer and he felt like eatting some french fries.  He had recently seen the television ad where Ore Ida claimed that each serving was under a 150 calories a serving. 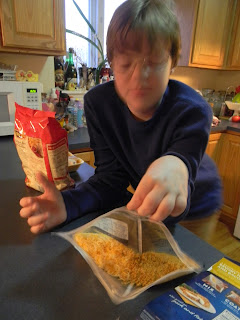 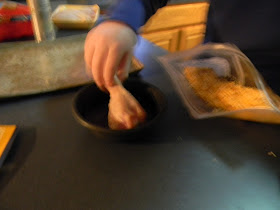 He followed the directions on the package which said to dip the chicken in water before placing in the bag.  The water was not enough to make a much of the coating stick.  I would recommended using an egg wash, which is what we will do next time. 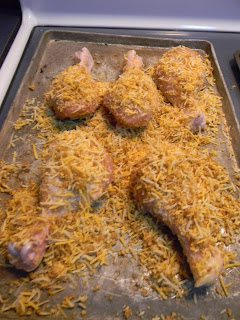 Since he did not ge an even coating, he added the rest of the bag on top of the chicken. 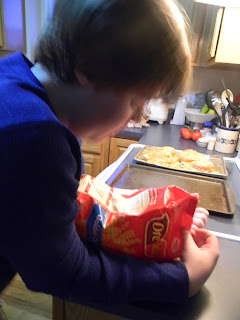 Reading the back of the fry bag to see how long they needed to be in the oven. 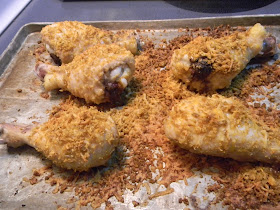 The chicken came out all crispy and golden.  He cooked the chicken 30-40 minutes in the  oven. I helped him to make sure they were done, and that they were no longer pink. 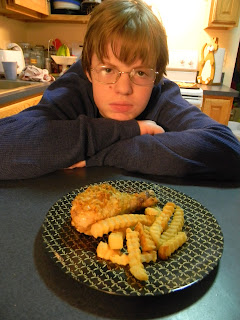 He wanted to eat, not pose for an after picture.  He was a bit grumpy here. 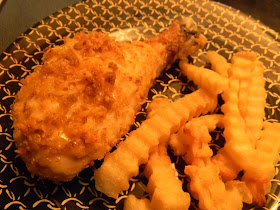 The end result was delicious cheesy coated chicken legs  that we all enjoyed.