While going through my old pictures this past weekend, I came across many pictures of Kyle's past  birthday parties.  Back in the "olden" days when Kyle was a baby and todder, I actually had a camera that used film!   Also back then, I seemed to have more time to scrapbook.  The pictures from his 1st and 2nd party were scanned from my scrapbook pages and then cropped so I could post them here. 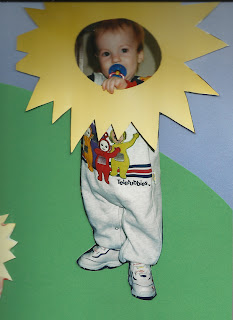 Back in the late 90s, early 2000s there was a show called  Teletubbies.  Kids everywhere liked to watch the antics of Tinky Winky, Dipsy, LaLa and Po.  Half baby, half stuff animal like  characters with televisions in their bellies.  At the beginning of the show, the sun with a real baby's  face would appear.   One thing that I like to do at all of our parties is to take a picture of each child with something that represents the theme.  For our Teletubby party, it was the baby in the sun. 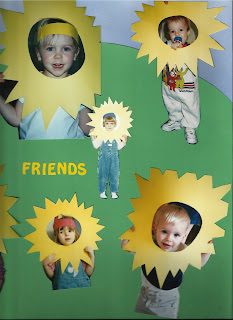 All of his friends were 3 and younger and loved posing as the baby in the sun.  I used the outdoor scene from the show as the background in my scrapbook.  It is a very cute page! 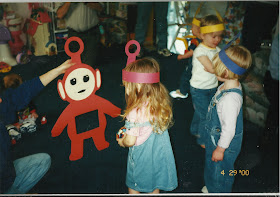 This idea can be modified for current preschool  shows. Each child wore the headgear of their favorite character.  My oldest daughter Kristina is wearing the Po.   We played a game where each of the kids threw a ball through Po's belly made out of cardstock.

The Telletubbies loved to eat Tubby custard and Tubby Toast.  To make Tubby custard, I added food coloring to vanilla pudding.  I actually didn't take pictures of the food we ate that day.. GASP! If knew 12 years ago I would have a blog, I would have.   I do know the food  was child friendly due to the age of our guests. I know I also had a spread of various items for the adults. 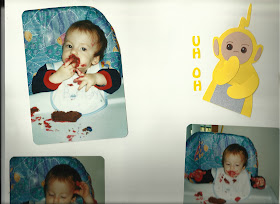 The cake was made from a Wilton Teletubby pan. Kyle  was covered in red frosting, because  he was given a big chunk of Po cake.   See the paper piecing of LaLa?  I made all of  the teletubbies by hand  out of cardstock, and placed them on my pages.  I loved how they turned out.    While this show is not on the air anymore,  the ideas can be adapted for other childrens' shows. 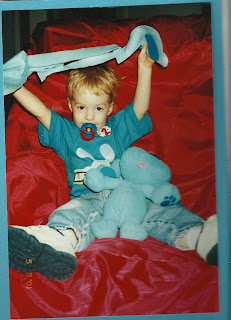 When Kyle was 2, his favorite character was Blue from Blues Clues. I am pretty sure that is still on the air.   I found a page on NickJr.com.   We watched back in the day when Steve was still doing original episodes.    I covered our family room chair with red fabric so it would look like "The Thinking Chair".  I love this picture of Kyle. 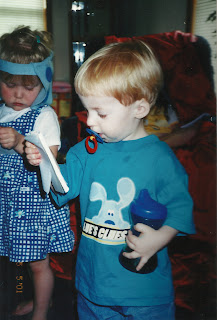 I gave each of the kids a notebook and we looked around the house for Blue's paw prints. Once we found them all we went back to the thinking chair and solved the question. 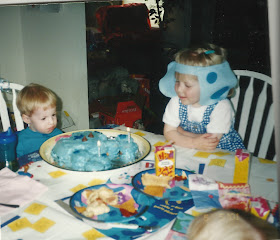 Each of the kids wore Blue clues ears made out of blue felt.  The ears can easily be changed for other types of puppy parties.   We ate dog bone dogs (hot dogs wrapped in crescent rolls) and juice boxes.  Again I did not take a picture of the food by itself, but can see what we ate in some of the pictures. 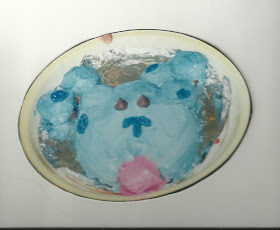 I made the Blue Clues cake using a round cake and several cupcakes.  I did find a similar cake on NickJr.com. 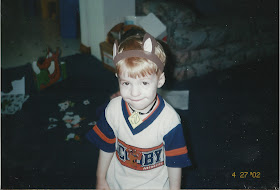 When he was 3, he still liked dogs, but this time it was Scooby Doo that was  the theme of his party.  All of the kids wore Scooby ears and dog tags made out of craft foam. 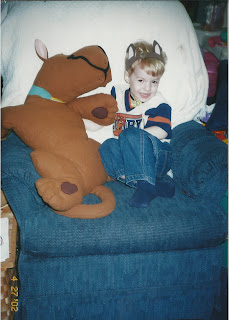 We took turns posing with Scooby 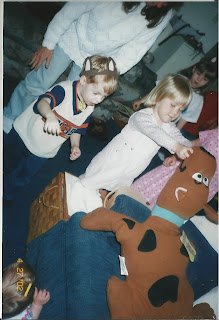 We solved the mystery of who ate the Scooby snacks.  This game was similar to the Blue Clues game.  I made clues  and black paw prints, and left them around the house.  Each clue brought us to another room, and eventually led to Scooby.   I love the look of surprise on Kyles face when he found that Scooby was the one who ate the snacks.           Food for a Scooby party is pretty easy.   Shaggy and Scooby are always hungry and eat just about anything.   We had single size pizzas and scooby snacks. (chex mix in cupcake papers)

His 4 yr, 5 yr and 6 yr  parties will be posted in Part 2.  I did have a digital camera at that time and many more pictures. I will be sharing his space party, dinosaur party and magic party.  I hope you stay tuned.
Pams Party at 5:07 PM
Share