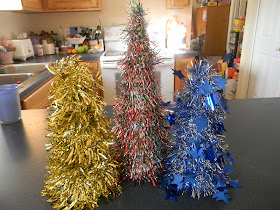 I saw a tinsel tree tutorial on another blog a couple of weeks ago. I wish I could remember where I saw it so I can give it credit, but my memory is failing me.   I did like the idea so much, I knew I wanted to make some of my own. 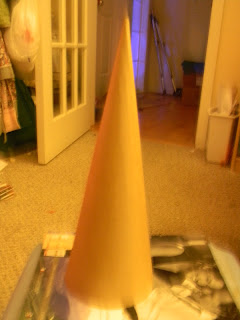 I found these cones at Michaels for only $1.25.   I also used inexpensive styrofoam cones for the smaller trees. 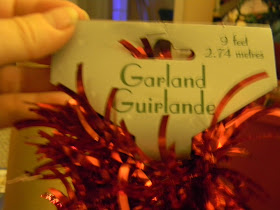 The dollar store has several kinds of garland for only $1.   I bought a few different colors. 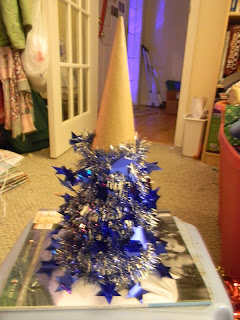 I started with the silver and blue star tinsel. I thought this would be a pretty decoration for New Years in addition to Christmas.  I wrapped the cone, hot gluing every few inches.  As you can see though I actually had a problem.  The 9 ft length was not long enough for the tall cone.  I went to the dollar store to buy another strand, but they were all out of this particular color.  =( 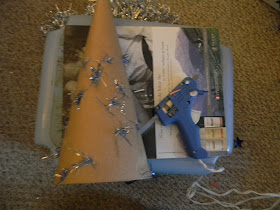 I was disappointed, but knew I could fix the problem.  I removed the blue and silver tinsel. 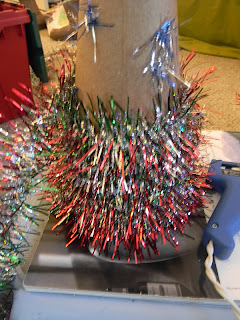 I found a pretty red, silver and green strand mixed in with my decorations that was 24 ft long. I used that on the tall cone.  I did use the blue and silver but on a smaller cone. 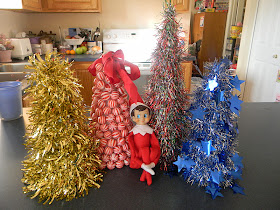 Buddy approves,  and is enjoying some times resting by the pretty trees, which make a nice additon to the kitchen counter.
Pams Party at 12:26 PM
Share