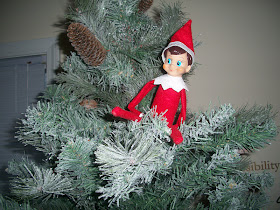 Buddy (named after our favorite movie Elf) arrived at our house last weekend.  He first came right after Christmas last year.  I was very sentimental when I saw him, because my mom has had an elf that looks very similar to  Buddy for years.

Buddy has a difficult job at our house.  He isn't watching over younger kids who are super sweet, and worried what secrets Santa might hear.    He is watching over a 10 and 12 year old who think it is fun to poke Buddy in the belly, so he will lose his power.   Santa realizes how difficult it is to watch two pre teens, so he has reestablished Buddy's power twice already.

At least the almost 15 yr old has been really nice to him.  That could be the case,  because she knows that Santa really does bring coal when you are naughty.  When she was just about to turn 5, she was having a very naughty year.   One thing I distinctly remember her doing that year was taking a purple marker, and drawing a line all through the kitchen and living room. (think  Harold and the Purple Crayon)   I kept telling her  Santa might bring her coal, but she did not believe me.   The look on her face on Christmas morning when she found a small lump of coal (a small round candle with the wick removed)   in her goodies was priceless!!  I remember her in shock saying..  "He really did bring me coal!!"  Since she was still young, Santa just wanted to remind her to try  and behave a little more.   The next year she  was a bit better.  The other two kids were only 2 and 6 months old at the time, so they do not remember Santa bringing their sister coal.    If they keep poking Buddy,  I think there is a good chance they might get a lump of coal with their goodies in their stockings this year.
Pams Party at 3:32 PM
Share