We Will Never Forget 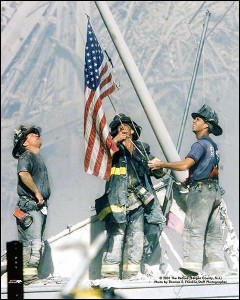 Where were you on the day 10 years ago, when we were all changed forever?   I was at home with my three young babies.  My oldest was only 4 at the time, and preschool was not due to start until the following week. I was still in bed when the first plane hit.  I had the Today show on, and was watching Matt Lauer explain there was some sort of accident at the World Trade Center.   At that point, they thought that a plane had accidently gone off course.  Little did they know, that in mere minutes almost 3,000 people would lose their lives.   I got up, and turned on the computer.   Kara was only 2 months old at the time, and I was (and still am) part of a mom board for July 01 babies.   I went to my mom board to see if anyone was posting at the time.  There were several of us on the board that morning.  We were chatting about what was going on,  and and I remember the horror we all felt when we watched the 2nd plane hit  live on the air.   I remember feeling scared about the world for my three innocent babies.    I had the TV on most of the day to find out what was going on, but I also wanted to shield my 4 year old from the images.  She did see just enough to know something bad had happened that she did not understand.  Aaron Carter was her favorite singer at the time.  (he was still a young, child singer himself in 01)   She asked me if Aaron Carter was in the building that fell down and if he broke his leg. There was such an  innocence in that question.   I assured her that Aaron Carter was fine, but told her as gently as I could that there were others who were not.   I called my husband at work to see if he had heard the news.  He had, and he assured me that everything was going to be okay.  I do believe he came home work early that day though.   We had a vacation scheduled for 9/13-9/16 in northern Michigan.  We debated if we should even go under the circumstances.   We decided that we should go, and try to keep things as normal as possible for the children.  I remember  the feeling all around us as being surreal.  The feeling that this really wasnt happening, and it was all a dream, but unfortunately that was not the case.   There were TVs on in the hotel, so we still kept up on what was going on.  There was such a feeling of quiet, such  a somber like mood with all the guests  at the hotel. After our vacation, we had to try to get back to our normal lives, but in a world that had changed.  Flash forward to the present, and my kids have grown up a bit. They are no longer innocent little babies.   They are now in 5th-9th grade, and they only know a time when America has been at war.   They have seen the affects of the war in person.  Kara's friend Caitlyn's dad was seriously injured fighting for our country.    On the positive side they also know a country that is very patriotic. The know a  country that pulls together in moments of crisis.  They can see the goodness in things, not just the bad   They will know the importance of family and the fragility of life.  Those who were  children on 9/11, will be the generation who make this word a much better place.

Today is a day of remembrance.  A day to remember the lives of people who died because of that fateful day, and to thank all of those who have  fought for us since.  This is the anniversary of a day we were changed forever.   A day  we will never forget.
Pams Party at 12:27 PM
Share