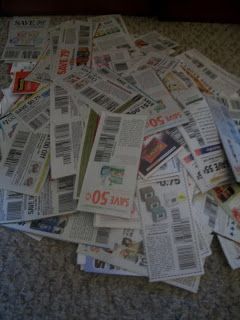 Sorry for my lack of posting yesterday.  The first day back to school with 3 kids in 3 different schools means there are a lot of things that have to be done.   Once I finally got everyone where they needed to be and had worked on some of the laundry, I was literally falling asleep.    I only had 4 hours of  sleep the night before.  I got into bed late, and then was woken up a few times by one of my children who could not sleep.  Since I am a light  sleeper, if someone is taking a shower at 3 a.m, I know it.  The 3 a.m. shower taker was even thoughtful enough  to come tell me that they were already up at 5:30 am, 30 minutes before my alarm was set to go off.   By 11 am, I had already been up for about 6 hours and knew I could not make it all day.    I took a nap for about an hour, and then I had enough energy to tackle some of my afternoon to do list.  I needed to go to Staples for ink (didn't happen),  I needed to file the giant stack of coupons (pictured), make a grocery list, pick up food for the lizards and turtle (didnt happen until almost 9 pm), and do  6+ loads of laundry (only got 2 done).   The plan was to go to the grocery store once all 3 kids were home from school, so I could get their imput on what they wanted for their packed lunches.  I did not want to repeat the morning of packing when they had no idea what they wanted to take, they just knew they did not want to take my suggestions. 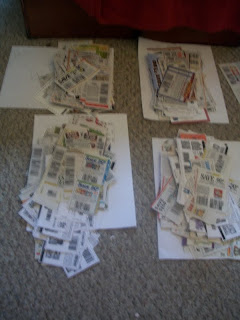 I got a good start on the coupon sorting by about 1 pm after making my list.  I like to file my binder alphabetically.  I do it that way because for years I had a coupon box with coupons in alphabetically order. I liked my coupon box, but I wanted to have my coupons where I could find them quicker.  I spent a lot of time looking through the box instead of just glancing quickly at a page.  The binder does have its downside.  It is not as easy to file the coupons into the different pages, as it was to just drop it in the box. I tend to put it off to long, which is how I got the giant pile.   I divided the piles into smaller piles by breaking up the alphabet.  I then divided each of those piles by each individual letter. 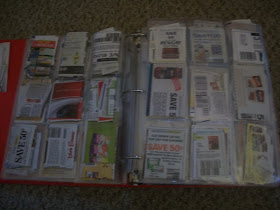 I was on my second pile of coupons  when I realized it was time to pick up 2 of my kids.  I found one quickly, but the other one did not see the car which took some extra time.  Once they were home, and I had heard about their days, I had only 30 minutes before child 3 was due home.  I worked on a few more coupons and then went to the bus stop.  That bus was over 20 mins late.  By the time I got back to the coupons, it was almost 5 p.m.    I finally got everything filed and was ready to go to the store it was already  after 6. (so much for my plan)  Once I got there, I realized half the town was there as well.    Seemed everyone needed snacks, lunch food, last minute school supplies etc. 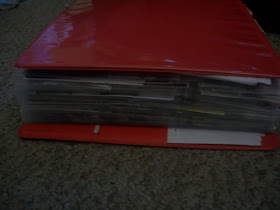 I went to Meijer, which has some great snack deals this week.  We finally finished at 8.  Since I had not had time to make dinner, we went to the Taco Ball drive thru.  Many other people had that same idea at the same time.  There were at least 10 cars in line.   I picked up the 12 pack of tacos for dinner, and stopped for the pet food, (crickets) on the way home.     By the time the groceries were brought in, and we had some tacos it was already after 9.  I then had to tackle the giant pile of papers the kids needed filled out and signed.  3 kids in 3 schools, means at least 15 forms to fill out.    I fell into be exhausted around 11.

So now it is day 2, and time to catch up on what was not completed yesterday.  I will be posting the Staples deal that I hope to pick up today.    I would post my Meijer best deals of the week, but as you can imagine from how my day went, I didnt even bother to take a picture yesterday.

Hopefully I will be all caught up by the end of the week.
Pams Party at 9:31 AM
Share