Fresh From the Garden Goodness 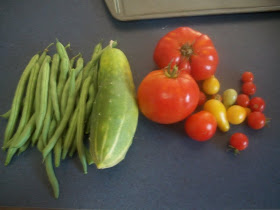 I picked these from our garden today.  One of my favorite meals of the summer is a veggie dinner with homegrown food. 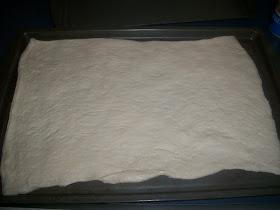 We decided to make a cold  veggie pizza.  While this is a pretty common recipe, this is how we make ours.  I used refridgerated pizza crust that I got on sale.   I sprayed a cookie sheet with cooking spray, laid out the dough and followed the directions on the package.  The Meijer brand cooks at 400 degrees for about 14 minutes.     When it is lightly golden brown, take it out of the oven, and let it cool a bit. 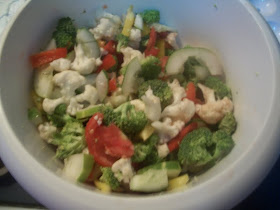 I like to cut my veggies and mix them together in a bowl before putting on the pizza.   From the garden I used the tomatoes and cucumber.   From this weeks sale at Meijer,  I used broccoli, cauliflower and peppers.  You can use whatever veggies you like best.  We change it up often.  Sometimes I add carrots, mushrooms, and others depending on what I have on hand. 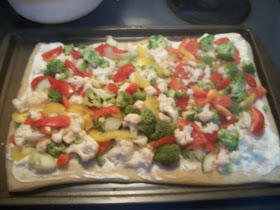 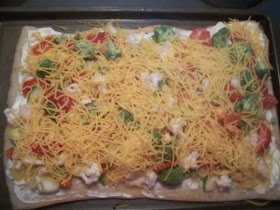 I added a couple of handfuls of shredded cheese and then placed in the refridgerator until we were ready to eat. 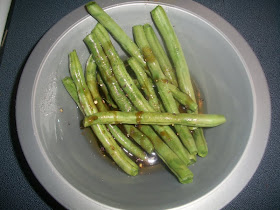 I tried something new with the green beans that I picked from the garden.  I like them best when I place them in a plastic pan with just a little bit of water and cook them in the mircowave.   After doing that I thought of somethings I could add to give them some flavor. I was going to put Italian dressing on them, but realized the bottle had an expiration date, dated a month ago.  I then saw a bottle of balsamic vinegar dressing, and decided to try that.   I didn't know there were recipes similar to this online until after I made them.. LOL!   I felt they also needed a little bit of seasoning, so I added a bit of salt and pepper.    I hope to get a few more batches of beans before the garden is through, and will make them this way again.