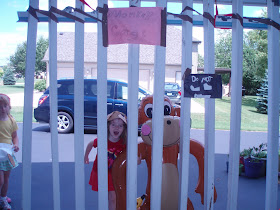 I am still in the middle of end of school chaos, so I have had very little time to make things this week.  Instead I thought this would be the perfect time to share another  one of our favorite parties.   I mentioned in an earlier post that Kara has a love of animal themed parties.  The year she turned 7, she wanted a zoo animal party.  The closest zoo is about 45 mins away, so it was not ideal for us to travel to the zoo.  Instead, we did our best to have a pretend zoo at our house.     For our photo op, we had each child pose in the monkey cage.    A friend who has a blinds business gave me the cardboard inserts to make a monkey cage.  Originally, I had hoped to make a standing cage wall to stand  in front of our deck to look like there were two sets of cage bars.  That did  not work out so well, so instead we attached the "bars" to our garage and the girls stood behind it and posed like a monkey. 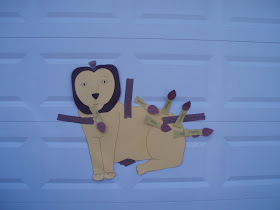 We played pin the tail on the lion.  I made the lion out of yellow posterboard and brown card stock. 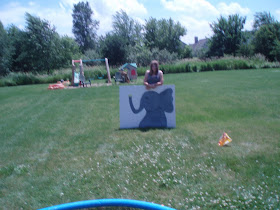 We played a game called Please Feed the Elephant.   Each child was given a spoon and a marshmellow circus peanut.  They had to jump over a series of pool noodles and feed the elephant as quickly as possible.  My oldest daughter is holding the elephant board.  There is a small hole at the top of the trunk, to insert the circus peanut.  I was able to use this  game board at two of our parties,  this party and our safari party for my son. 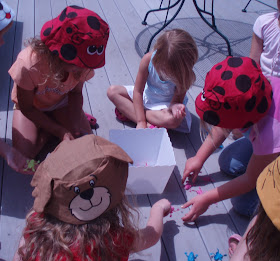 Each of the girls were given an animal bucket hat.  Here they are playing a jumping frog game I found at Target.

For our craft we make a monkey paper plate craft that can be found on Oriental Trading  here.

We served regular zoo type food, like hot dogs, chips, fruit kabobs.  This was around the time that the Hello Cupcake book came out with zoo animal cupcakes.   Kara chose the elephant, monkey and lion. 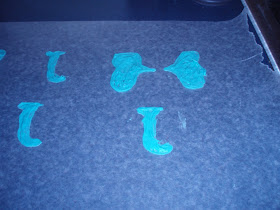 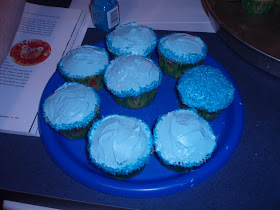 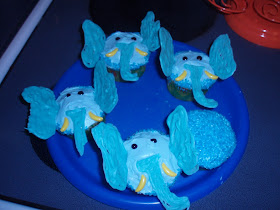 To  make the elephants,  you melt blue candy melts and draw trunk and ear shapes on wax paper.   In the 2nd picture, I added blue sugar around the perimeter of the cupcake.   In the last picture I added the chocolate pieces and added  banana shaped runts candy as the tusks. 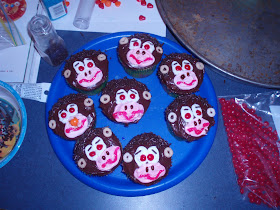 I was running very low on time when I was making the cupcakes. The monkeys are a little on the messy side.  One thing that I have learned in my many years throwing  parties, little kids do not care if things look perfect.  7 yr old girls love monkey cupcakes even if they are messy.   I used  chocolate sprinkles for the fur on the top portion of the cupcake. I used white and pinkish, flesh colored frosting for face. I used red hots and one sprinkle for the eyes and eyebrows.   Cheerios were perfect  for the ears, and writing gel for the mouth.   If you would like them to look neat, dont make them right before the party. LOL! 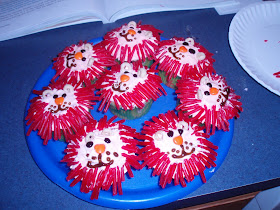 The lions were made with a light orange frosting. An orange candy was perfect for the nose nose. The mane was  made from licorice rope and  I used writing gel on the face. 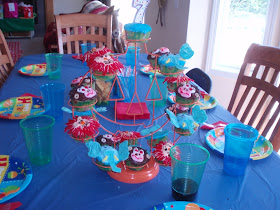 I displayed them on my halloween themed cupcake stand to mimic a ferris wheel.  If I had more time I might have decorated the ferris wheel. In the end,  it didnt matter because again, little kids do not really notice details like that.  Instead they were just excited to pick which  zoo animal cupcake they were going to eat. 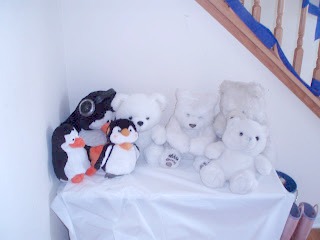 One good thing about having way too many stuffed animals is when you need to make a zoo,  you have enough animals on hand.  This is our artic exhibit with our polar bears and penguins. 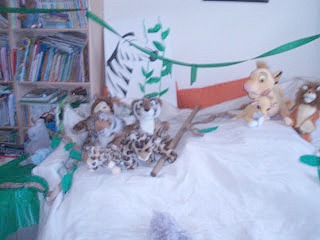 In this exhibit we had our African animals. We had plenty of tigers, lions and leopards.  In the back I reused a zebra board from our safari party. 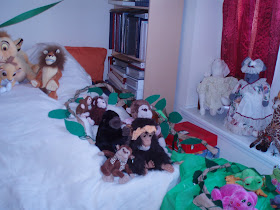 We also  had plenty of monkeys  for a monkey exhibit. 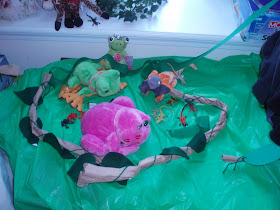 Here is our menegerie of animals for a reptile exhibit. 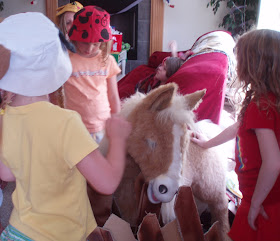 In this picture the girls are visiting the petting  zoo.  This was the 2nd party Kara has had were Butterscotch has made an appearance.

After opening the presents each child went home with animal themed goodie bags. 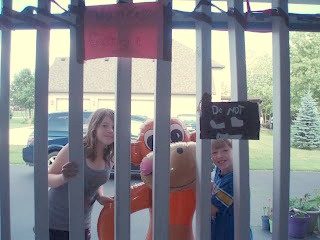 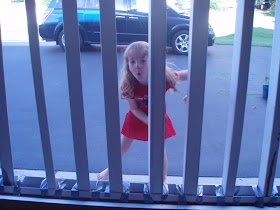 Look, there are two other monkeys in the monkey cage! These are rare monkeys because this pic  is the only one with both of them together smiling from that entire day.  I think it is the only picture of the male monkey, because he kind of hid during the party to get away from all the girls.  The older female monkey was going through a phase  where she did not like to have her picture taken.  I have very few pictures during that time period  with her face instead of the back of her head.  That picture is definitely special!

Make sure to check my linky party page to see all of the awesome blogs I am linking this party to.
Pams Party at 11:17 PM
Share