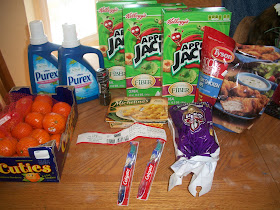 I normally wait until later in the week to do my grocery shopping, but this week I knew I had to go sooner than later..  VGs had FREE products after coupons, so I knew they would be running out soon.    Just as I expected, there were only 2 Purex left on the shelf.  Hopefully they will be getting more in since the sale runs until Saturday..

2 Colgate toothbrushes were FREE!   They are on sale for $2 each.  I had two $1 coupons that doubled, making them totally free.

The Michelinas wheels and cheese were because I had my teenager with me who threatened to pass out if she did not eat right away.   I gave in and bought them for $1.50.   I felt I made her suffer enough by dragging her shopping with me.   hee hee..
Pams Party at 1:30 PM
Share