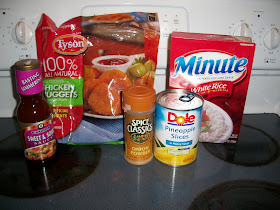 While I would like to try the crock pot recipe I posted earlier,  I knew I was short a couple of important ingredients.  I also thought why should I go through all the work to  bread chicken, when I already have breaded chicken nuggest in the freezer.   I had an idea, and Short Cut Sweet and Sour Chicken was born.     I supposed this recipe could also be called The Picky Eaters Sweet and Sour Chicken.  My kids do not like  some of the ingredients in the traditional recipe such as the onion, and green pepper.

I used about half the bag of nuggets, enough for each perso to have 4-5 nuggets each.

I then added the jar of sauce, onion powder, and 5 slices of pineapple cut up.  I did not measure the onion powder, just added 4-5 shakes until it looked good.  (I measure like Rachael Ray  LOL)

I cooked it on medium in the crock pot for about an hour and a half. When serving, I placed it on a plate of rice.   I got enthusiastic thumbs up from the picky eaters who asked me to make this recipe again.
Pams Party at 8:22 PM
Share