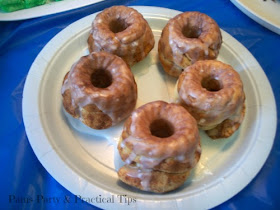 So far I have shared our Portal Cake, and Pokeball Rice Krispie Treats, today I will be sharing more about our Skyrim Sweet Rolls and Minecraft Marshmallows.

I honestly do not really know much about Skyrim other than it is a role playing adventure game set in a fictional land with feuding groups and dragon slaying.  A popular treat found in several locations in  the game is a special sweet roll.  Once again there is an "official" recipe that has  a lot of ingredients to make it from scratch that can be found online.   While I am sure that the recipe is very good, I knew there was a faster way to make sweet rolls that I knew my son would love. 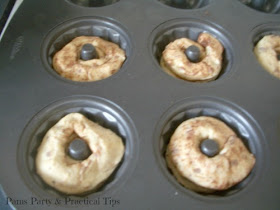 I bought a mini bundt pan at JoAnns with a 50% off coupon, so the price was very reasonable.  I also know I will use it again.  A mini bundt pan is perfect to make these rolls because they rolls in the game have a hole in the middle.  Instead of making my own dough,  I opened a tube of cinnamon rolls. Each pre-cut roll fit perfectly inside one of the mini bundt cups.  I baked the rolls for the amount of time on the tube. In hindsight, I wish I would have baked them a few minutes less, because they came out a little more done than I would have liked.  It did not matter though because they still tasted good, and Kyle loved them. 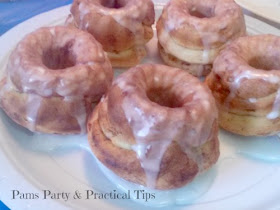 I thought about using the icing the came in the tube, but I did not think it was going to be enough. I decided to make my own with some powdered sugar and a little bit of milk. The sweet rolls in the game have a thick white covering of icing.  My icing did look white but it was a little thin, causing it to drip off of the rolls. You can see in the picture how it puddled a bit the rolls.   Again, Kyle did not see this as a problem.  Within 24 hours all of the rolls were gone, and I know he had at least half of them.

Tomorrow I will be sharing more about our Minecraft Marshmallows

Thinking about having your own video game party?  Here are a few fun things I found that you might be interested in.

Is anyone else addicted to this game?  I can't stop playing it.. This would be a fun theme for a party..  Hmmm..  Maybe I can talk my daughter into this theme for her summer party.
Candy Crush Mixed Berries Flavored Fruit Snacks - Tiffi Character Box Serves 10

My son wants one of these.  I think I know what I will put in his stocking next year!
Portal Turret LED Flashlight with Sound by Think Geek