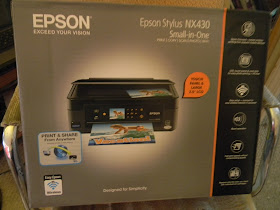 We started the day with a trip to Staples.  There were several printers I was interested in that were on sale. Every time  I found out that I thought about buying, it was out of stock.  I guess that happens on the last day of the sale.  A second salesman came up to use while we were in the printer row to see how things were going after we had just found out that my 2nd or 3rd choice was out of stock.   I told him that almost all of the printers in my price range were sold out.  He asked the other salesman if I had seen the Epson Stylus yet.  I had not.  It turns out to be the same one he has at home, and in my price range.  I liked the size, and the fact that it  is wireless.  This is a step up! We had been using a low end HP that you have to plug into your computer  It was $30 of, and the very last one.   My daughter was  thankful we finally found one, since starting to lose patience with how long it was taking. She is one of those just grab it and go type of shoppers. (total opposite of me.. hee hee)    So far, I really like it. An added bonus was the $5 off $25 coupon I received at checkout that I will use to buy more ink. 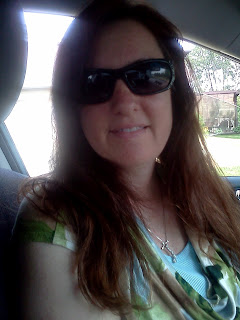 The next stop, the hair salon.  She wouldn't let me take a before picture of her, but here is one of me.  My side bangs had totally grown out, and were starting to annoy me. 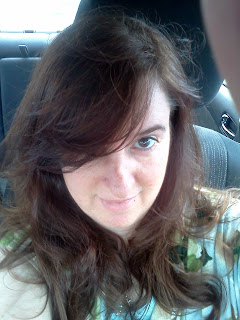 I am loving how cute it turned out.   I have side bangs again, and she blew out my hair. I only have it done when I have my haircut. I don't have the time or patience to do it at home.   Since my hair has natural wave, she curled it with the brush instead of attempting to blow it straight.  It is a little wind blown because I didnt take this picture until a couple hours later. 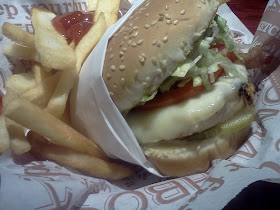 We decided not to go to the mall today, since it is was getting late. Neither one of use were in the clothes shopping mood.   We will probably go in a month or so.   Instead we had dinner at Red Robin.  I ordered the California Chicken Burger. YUM!  I can never eat the entire thing, and brought home half to eat tomorrow for lunch. 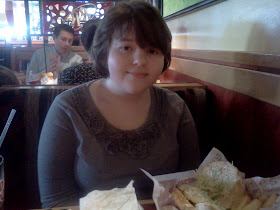 She did allow me to take a picture of her at dinner with her cute new haircut.  I am looking forward to the next girls day out.
Pams Party at 11:39 PM
Share