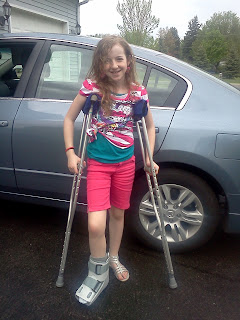 If you are a Facebook follower, you know that my daughter Kara has been having some trouble with a hurt foot recently.   Two weeks ago, she was hit on the top of the foot with a hard toy thrown  by a small child.  It was not intentional, she just happened to be in the wrong place at the wrong time.   Unfortunately for Kara, this is not the first time she has been hurt standing still.


We first saw our pediatrician on April 23, when we were in the office for strep throat. (Yes she was sick on top of being hurt!)   The office visit  was only 2 days after the incident.  Her foot was really hurting and she was not able to walk without limping. It did look slightly bruised, but overall not that bad.    The Dr. (ped)  said that it looked like a  soft tissue bruise, but if it  did not feel better in 2-3 days that I was to call the office.  She was cleared to go back to school  on Wednesday the 25th from the strep.  When she got home on  that day, she said she was in a lot of pain from walking on it at school.  We called the Drs office back, and they ordered X-rays.  We got them early Thursday morning.  Since it was the day of the Talent show, she did go to school, but with a crutch. She didn't feel secure enough on two. She had to attend school that day to be able to be in the show.  Luckily she was singing, and you don't need your feet to sing.   On Friday the 27th, we heard from the Dr who looked over the X-ray that there did not appear to be a break.   We  were also told that we would need to do another recheck if it still has not improved in 5 days.  Over the weekend, we noticed that the bruising was getting worse, not better.   By Monday, she was a whiz on two crutches, so she took them both.   She also told me that there were some boys in the hallway, and her class who did not pay attention to where they were walking, and her foot had been bumped on more than one occasion during the week.  On Wed, May 2, the Dr ordered more X-rays since she was still in a lot of pain, and referred us to the Orthopedist. 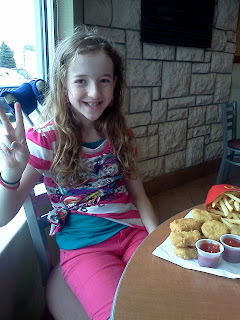 Since her  Orthopedist appointment was scheduled for 1 p.m.  today, she had a bonus treat of eating lunch at her favorite fast food place.  We had an adorable elderly couple sitting at the next table.  They asked if she had her hurt her foot in a soccer game.   I told them how she got hurt doing absolutely nothing, but standing still.  A soccer injury would make a better story.  LOL!  They wished her well at her appointment. 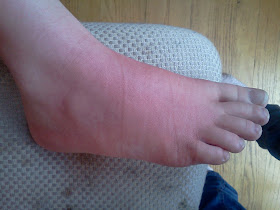 Here is the swelling and bruising last weekend.  Her foot was reddish purple, but it's was hard to get the color on my cell phone camera. 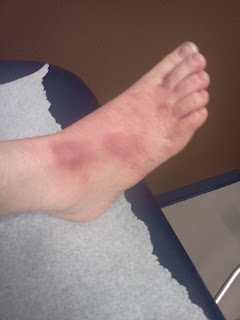 This is how her foot looked today. Less overall bruising, but more concentrated where  her foot was hit. The Dr. (ortho)  looked over both sets of X-rays.  He is still not seeing a sign of a fracture. He explained how a deep tissue bruise/bone bruise may take some time to discolor on the top of the foot. The bleeding is deep inside, not at the surface.  He felt she might have also  been re-injured  during the times when her foot was bumped. 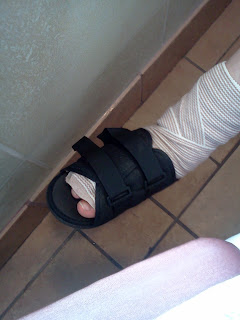 This is what she has been wearing the last several days.  The Dr. said it was good, but didn't give her enough protection on the top of her foot, to protect it when bumped. 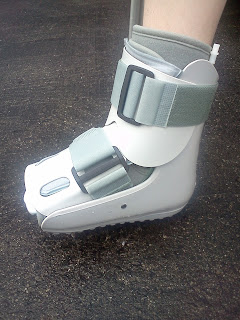 This is what she is wearing now.  She will be wearing this for the next 2 weeks., and should keep her safe from careless boys.   We will have a follow up with the Dr.  then.  If she is still having problems with it then, we will have advanced imagining, like a MRI.   She has her boot for only 5 hours, and she is already walking without crutches.   Woohoo!

Hopefully this fashion accessory will be short lived, and not be needed to be worn again.
Pams Party at 6:13 PM
Share