Its a Snowman-Snow Day Party 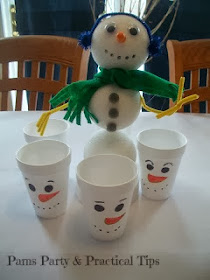 Surprisingly, living where we do in Michigan, we have not yet had a snow day. This winter has been a lot more mild than we can remember, and the snow melts within hours of falling.  The weather channel is even talking about this unusual lack of snowfall.   While we have not had the chance to make a real snowman, the kids and I put together a snowman themed party  with ideas that can be used if we actually do have a day off of school.    Yesterday I shared how I made the snowman centerpiece here.  Also pictured in this photo are the snowman drinking cups that Kara and I made. 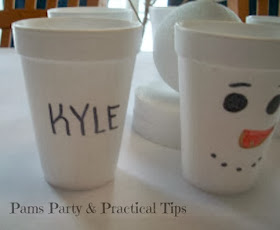 One thing really nice about styrofoam cups is you can easily add your name to tell them apart. 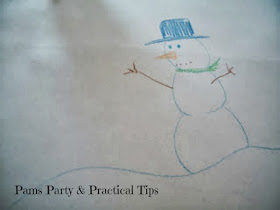 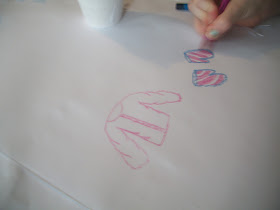 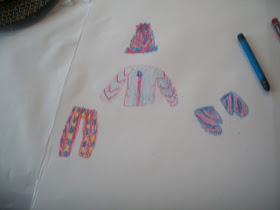 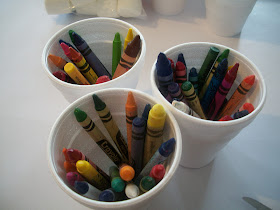 I lined the kitchen table with white craft paper, and gave everyone a cup of crayons. We then drew winter themed pictures.  If you do not have craft paper, a white plastic tablecloth from the dollar store would also work. 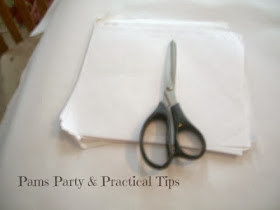 I gave the kids some scrap paper (from my printed coupons) and scissors.  They  have been busy making  quite a few unusual snowflakes for a good hour.  Before you worry about the sharp scissors in the picture, my kids are older (5th grade and up), and have been using scissors for a long time.  I also do not know what happened to the 4 other pairs of scissors that are supposed to be in the desk drawer.  All of them have seemed to have disappeared.  Hmm.  I wonder if we have a scissor fairy that comes and takes them in the middle of the night. 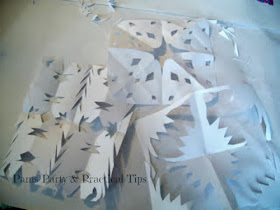 A few of the earliest snowflakes.  I have a pile of a least 10 more sitting in front of me on the desk. 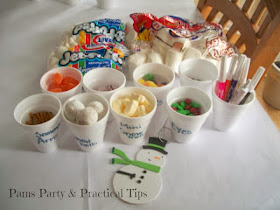 I set up a construct a snowman station, using  several sizes of marshmellows,  and lots of other fun goodies. 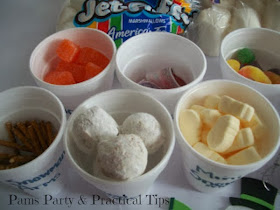 There were snowballs, noses, pretzel arms, marshmallow babies, gumdrop and ring hats, fruit by the foot scarves, M & M eyes, and chocolate chip buttons.  I also had some edible markers and cookie gel to draw on the faces. 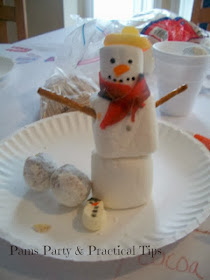 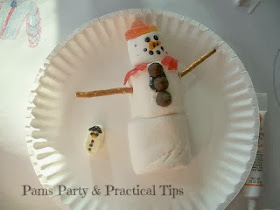 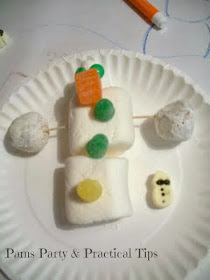 Here are our creations... fun to make, and delicious to eat 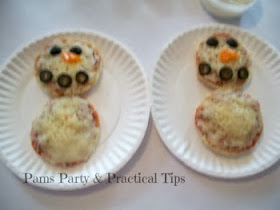 We also had snowman themed food.  We made English muffin snowman pizzas.  I used black olives for the eyes and mouth, and an orange pepper for the nose.  I chose a white colored cheese to make it look more like snow.  If your kids won't touch black olives (two of mine won't either) these could easily be made with mini pepperoni. 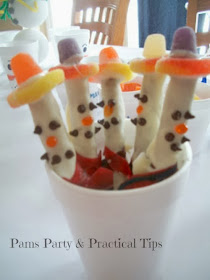 I made snowman pretzels rods by covering them in white chocolate, and adding the faces, hats and scarves 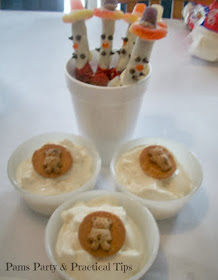 The sledding bears are having fun  in bowls of vanilla yogurt. The sleds are Nilla wafers. 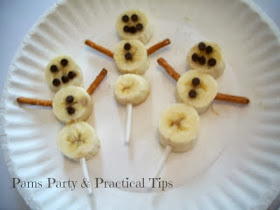 We also had banana snowmen on a stick  with chocolate chip eyes and pretzel stick arms. If you do these, make the slices thick enough for the stick to go through, or they could easily break. 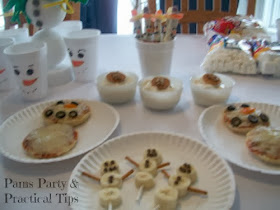 Now if only we had a real snow day.  While I am okay with the lack of snow, the kids are really hoping it happens soon.